The vegetable garden yield this season is less than we hoped, but the corresponding weight loss has been a pleasant surprise.

Yesterday’s count on peas was 44. That was actual peas, not peapods.

The grandkids, taking great interest in the garden, were the ones who picked and shelled the most recent round. When we sat down to lunch, there were the 44 peas on the table in a small glass bowl, cooked and seasoned with butter, salt and pepper.

As the bowl circled the table, I thought maybe someone would pray that God would multiply the peas like Jesus multiplied the fish and the loaves, but no one did. The peas did not multiply.

Despite meager servings, everyone said they were the best peas they ever had, although I personally thought that No. 1, 2 and 3 were good, but No. 4 was tasteless. 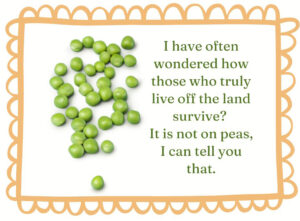 I have often wondered how early settlers, and people today who truly live off the land, survive?  It was not on peas, I can tell you that.

Most likely they survived on cherry tomatoes. Ours are exploding. The basil is thriving as well, so if push comes to shove, we could live on bruschetta. Of course, that will be providing we find a plant that grows baguettes.

The cucumbers are so slow developing that if they don’t pick up some size soon, our hopes of cucumber sandwiches may be reduced to paper-thin slices of teeny, tiny cucumbers on croutons.

By contrast, the green beans are splendid. We had some for dinner the other night. They weren’t large servings, more like scant servings you get at high-end restaurants where they charge you more for serving you less.

It’s nice to have small helpers in the garden. My brother and I used to help our grandma around the farm sometimes. My brother liked gathering eggs. There were only two eggs one morning. Grandma handed them both to him and noticed he was holding them behind his back. When they got back to the house, the eggs were cracked.

“What happened?” she asked.

“They were fighting,” he said, age four. Some of your best storytellers are under the age of six.

I’m considerably over the age of six, but I may have told the youngest grand a tall tale when I said the raspberries we were picking were like candy.

“Pop one in your mouth,” I said. “They’re even better than candy.”

She popped one into her little mouth, ate it and broke a smile that could light the LaGuardia runway at night.

So then she had another and another and only five raspberries made it into the house, barely enough to keep two of the seven dwarfs alive.

You should see the teeny, tiny raspberry tart I plan on making.

The garden yield may be down, but the memories are growing just fine.