Other parents brag about their kids who are doctors and lawyers. We brag about our kid who can tell what you had for breakfast.

Little did we know when we welcomed a baby girl into this world years ago that she would grow up to have a fantastic sense of smell.

She often fine-tunes this ability on her sister. She slowly approaches, circles once, sniffs twice and says, “You had bacon for breakfast, didn’t you?”

Told she is wrong, she leans in close then says, “Sausage!”

It’s one thing when she can pinpoint a natural gas leak by the curb, but quite another when she asks when you changed your shampoo and conditioner. Not “if,” but “when.” 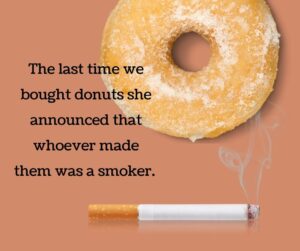 The last time we bought donuts she announced that whoever made them was a smoker. She insisted she could smell cigarette smoke mingling with the glaze. She was still sniffing while the rest of us were eating.

We all have our talents and quirks. Sometimes it is a fine line between the two.

She can smell horses after someone has been horseback riding, can walk in a house, deduce that the house was recently cleaned and guess what products were used with 90 percent accuracy.

Recently, she walked into our house and asked if I’d made bruschetta because she smelled basil.

If only there were a smell category on Jeopardy. “I’ll take herbs and kitchen smells for 1,000 please.”

As parents, we may have missed the boat. We could have guided her onto a career track for a perfumer or sommelier.

Her girls try to emulate her olfactory abilities. The other day one of them announced she smelled Spanish rice on me.

I said I was offended.

She said, “Don’t be offended, Grandma. Spanish rice is a very popular dish.”

It’s always reassuring to know I’m keeping up with the trends.

Her mother walked over and said it was not Spanish rice, it was garlic.

Bingo. I was wearing an apron I last wore making a stir fry.

Her girls may indeed have inherited her sense of taste and smell. From the time they were little, I would often set one of them on the counter to be a taste tester when making guacamole.

It was like having personal sous chefs—short sous chefs that were not allowed to use the stove or sharp knives, but still.

The other day our daughter with the nose that knows walked in and told her dad she could smell that he had been rummaging through old photo albums and books.

And she wonders why we sometimes keep our distance.