The vocabulary intended to soften the blows of blistering inflation is a testimony to creativity. Economists keep talking about consumers experiencing shrinkflation. They don’t mean consumers are shrinking (although you do look amazingly trim); they mean the products we buy are shrinking, but the prices are not.

One manufacturer that has been shrinking the size of cereal boxes goes a step further and refers to it as “price-packing-architecture.” That sounds so much better than “sticking it to the consumer.”

Cadbury Chocolate said they will be implementing multiple price hikes, calling them “pricing waves.” It almost sounds like you’re at the beach. How restful. But those waves aren’t water. Hershey is also on track to raise prices.

You can buy candy on the installment plan or kiss chocolate goodbye. 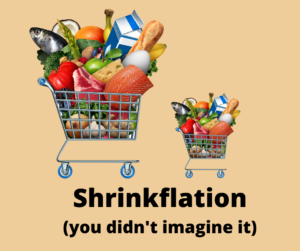 I like the Dollar Tree approach to compensating for shrinking profit margins—there’s no sleight of hand or double talk, just a straight up price hike. Many of the items now cost $1.25, but the signage still says Dollar Tree. The attitude smacks of “tough cookies.” There are fewer of those in a bag now, too.

The silver lining of inflation is that I no longer need help carrying groceries into the house. My usual run that used to fill the backseat now fits compactly in two bags. Perhaps we can think of shrinkflation as a new form of portion control.

The concept of paying more for less is an economic wildfire. A popular pizza chain revealed there will now be only eight chicken wings in an order instead of 10. Interesting, but my question is why do pizza chains sell chicken wings?

Clorox announced they will raise prices on 85 percent of their products, giving “clean-up on aisle 3” new meaning.

I can only imagine what the charge is to use the restroom. And there’s probably an extra charge on top of that charge if you want the privilege of closing the door.