A friend has long said she dislikes movers and shakers because they constantly move and shake everybody else.

It does seem that way. Movers and shakers at the top determine what we pay in taxes, how fast we can drive on the interstate and choose our friends and enemies for us around the world.

Particularly aggressive movers and shakers even attempt to dictate which words we can use and the thoughts we can think.

Deep within those layers are the movers and shakers that were part of the first Christmas as it unfolded millennia ago. Powerful people thought they were calling the shots, but they were small players in a story of incomprehensible grandeur. 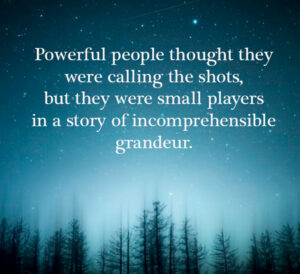 Roman Emperor Caesar Augustus issued an order for a census. And so it was that a young expectant couple made their way to Bethlehem. When King Herod learned a star had risen signaling a king was about to be born, he commanded the Magi to report back to him when they found this baby. The Magi gave him the slip.

Like every period in history, there were the powerful and the powerless at the time of Christ’s birth. The powerful, who were few, lived lavish lives while the vast majority scraped by under the shadows of coercion and brutality. Most people lived somewhere on a continuum between weariness and despair.

It wasn’t just a dark night when Christ was born; it was a dark time.

The young couple featured prominently in the narrative were downwardly mobile peasants. Neither were influencers like those today with hundreds of thousands of followers on social media. Although, ironically, like many big stars of today, the mother of Jesus is instantly known by one name.

Far from all things familiar, in a strange town and a very strange place for giving birth, Mary labored and delivered on a humble bed of straw. Who would have thought such an obscure beginning would forever mark history?

Shortly after the birth is when the real movin’ and shakin’ began. Celestial beings lit up the skies over fields where ragged shepherds tended their sheep. It was a heavenly announcement delivered first to commoners, those with no position, power or social capital.

Why start with the lowly? Because God often works from the bottom up. Because God Himself took on humility coming as a baby in a manger. Because the ways of God are not the ways of man. Man sees on the outside; God sees the heart.

The invitation to come to the manger truly was, and remains today, a come one and come all, wherever you are, in whatever condition you are. Christmas is for the joyful and the grieving, the broken and the whole, for those filled with hope and for those who anguish in the night.

More than 2,000 years later, around the world, the heart of Christmas remains unchanged. It is an invitation to one and all to draw near. “You will find him wrapped in swaddling cloths and lying in a manger.”

Come and see. Behold the wonder.