I just learned a new way to tell if you are “officially old.”

This tidbit comes courtesy of an 11-year-old granddaughter. She has no research to back this up, not a single poll or shred of scientific evidence. That said, she is keenly observant.

With exuberance and confidence, she shared her observation around a crowded dinner table: “Old people carry cash!” 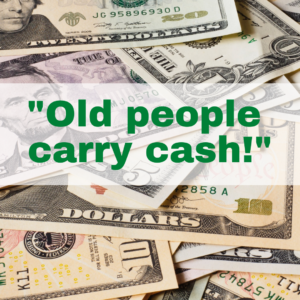 There you have it. If you carry cash, you are old. Sorry to be the one to break it to you.

“Especially men!” she adds. “Have you looked in their wallets?”

Not lately. Asking anyone to look in their wallet is generally frowned upon.

The girl is immediately challenged with others asking how she knows older men carry cash and where she has seen all this cash.

On the receiving end of doubt, she immediately counters with, “I saw an older man with hundreds in his wallet!”

She didn’t mean hundreds of bills but $100 bills.

It was getting good now.

Still trying to figure out where she is seeing all this cash in wallets, someone noted that she had been to a number of ballgames and school sporting events.

“She’s right,” I say. Like the girl, I have no hard evidence, but when I do speaking events followed by book sales, it always amazes me how many older people carry cash. The older the audience, the more cash payments and the fewer the credit card swipes.

In part, I am amazed by this phenomenon because I rarely carry cash. I currently have one $10 bill in my wallet. It is the same $10 that has been in my wallet for the past three months. It’s only there now because my husband put it there. The fact that I don’t carry cash does not mean that I am not old; it means I’m more like the exception to the rule.

My late father-in-law always carried cash. At the end of any family gathering, all the grandkids knew that Grandpa would get out his wallet and give each of them a $1 bill as he said his goodbyes. After he died, my sister-in-law found an envelope in a drawer filled with $1 bills. It was a sweet tradition.

Someone else adds to the conversation that fewer people of all ages have been carrying cash over the last few years. Even fewer since the pandemic.

Another grand, age 9, has been sitting quietly taking in all the talk about paper money. There is a momentary pause and she quietly says, “Grover Cleveland is on the thousand-dollar bill.”

I fact checked her. That’s right, I fact checked the grandkids. She’s right. Cleveland is on the thousand-dollar bill, which was last printed in 1945.

We don’t know how they know what they know, but we’re glad they know. They keep us young, even though we’re old.

What’s in your wallet?