I had a confession to make on the drive home.

“I almost jumped out of the swing,” I said.

Our son-in-law built a great swing set structure in their backyard. Two swings hang from thick rope anchored to an arbor. The hardware holding the swing is rated to hold 400 pounds. I can’t help but wonder who he had in mind when he calculated that weight load.

In any case, one of the girls invited me to swing alongside her. We pumped and pumped, enjoyed the wind on our faces and sailed higher and higher touching the sky with our toes. We stopped pumping and savored the easy glide back and forth, back and forth. 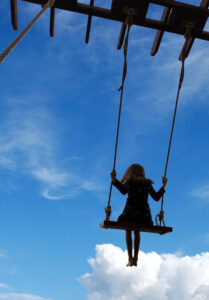 Swing therapy. If it isn’t a thing, it should be.

All of a sudden, I was possessed with the notion of jumping from the swing.

I could visualize it and even feel it. I could see myself slowing down, waiting for the arc, letting go and jumping.

And then I could see my knees jamming. Both of them, but the left one the most, because it had surgery twice when I was a kid. I was also able to visualize a lot of screaming and the part where they scraped me off the ground and trucked me to the nearest ER where an orthopedic doctor would look at me with incredulity.

And yet, I still considered it.

Oh, the call of freedom sailing.

Time is a tricky thing. The outside of you ages chronologically, but a big part of you on the inside is forever 17. That is the part that plays ball with grands in the backyard, arm wrestles with the ones encroaching on adolescence and lies on the floor hoisting little ones in the air on the bottom of your feet playing airplane.

It is also the part that imagines you are still capable of doing a cartwheel. Step, hand, hand, foot, foot. Done. Or better, a round off. Run, run, run, run, spring, twist, land with a thud, arms in the air.

I see these things in my mind and I can feel them in my limbs. A little voice in my head whispers, “You can do it. You can do it.”

Then a much louder voice in my head screams, “ARE YOU OUT OF YOUR EVER LOVIN’ MIND?”

“I honestly considered jumping out of the swing,” I tell the husband.

“It was a couple of months ago when we were all at that park.”

“Was that why you were complaining about your knees hurting?”

The answer was that he probably won’t do it again. At least not from that height.

In the interest of responsibility, let me say that people of a certain age should not jump out of a swing.

But you can still enjoy imagining it.