We’ve been doing a lot of sniffing here lately.

Usually, the husband is the one handing me something from the ‘fridge saying, “This smells bad. Here, see what you think.”

These days I’ve been the one waving things under his nose.

The husband got a one-two punch from COVID and lost his sense of taste and smell. Day Three, mid-afternoon, a couple hours after eating a grilled cheese I’d made for lunch. And no, the cheese had not expired.

He was on the couch and said, “I don’t think I can taste or smell.” 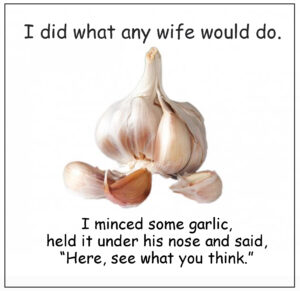 I did what any wife would do. I minced some garlic, held it under his nose and said, “Here, see what you think.”

I tried some mesquite rub. It’s potent mesquite that clears your sinuses and keeps them clear for three years.

The next time he saw me coming, he pretended asleep.

I consulted our primary care physician, Dr. Google, and read a theory that COVID shocks nerves in the nose. The reading suggested trying to awaken the nerves by doing a sort of “smell therapy.” The premise of trying to wake something up made sense.

I loaded little containers with spices and extracts. He held them under his nose twice a day for 20 seconds at a time, then ranked his sense of smell from 0-5. There were a lot of 0’s and .5’s the first few days.

He couldn’t smell or taste, but he could chew, so I made foods with crunch. I stopped short of deep-frying broccoli in a buttermilk batter.

To help entice his sense of smell, I stunk up the entire house making salmon. Nothing.

Barbequed chicken, smoked on the grill. Nothing.

About two weeks after this all started, I made Sunday brunch.

“Do I smell bacon?” he asked from a room away.

Oh, the magical powers of bacon.

An upward trend emerged. Slowly. He is regaining taste and smell, although yesterday he said a blueberry coffeecake I’ve made for years seemed “tasteless.” (The man lives on the edge.)

It’s impossible to say if “smell therapy” did the trick or if his sense of taste and smell would have returned on their own.

We do not take vision or hearing for granted, but we have taken smell and taste for granted. We just assumed. We never considered not being able to taste or smell.

These days we are giving thanks for the food before us with a deeper sense of appreciation—all the while inhaling every wonderful aroma.