I have often seen people in large groups wearing shirts emblazoned with the name of their family reunion and wondered what possessed them to draw such attention to themselves.  A few weekends ago, I became one of those people. I know now such shirts are not a bid for attention but a means of keeping a running headcount on a large group.

My sister-in-law, one of the most considerate people ever, had 25 shirts made—each neatly folded and wrapped in a bow, bearing the wearer’s name on it. If it had been left to me, I would have tagged everyone with a label gun.

The shirts were color coded, which my brother explained. “The green shirts are for little people,” he said, eyeing the little people up and down the line.

There were big eyes among the green shirts. The lower lip trembled on a 3-year old. The blue shirts were on high alert as well.

My brother began enumerating what situations the red shirts could handle: “medical emergencies, hunger, pretty much anything you can think of and fisticuffs.”

The kids were excited, even though half of them were unsure as to the meaning of fisticuffs. I don’t think anyone planned on fisticuffs at our reunion, but I’ve heard of large family get-togethers going south. It never hurts to be prepared.

Our oldest daughter, a natural organizer who enjoys crowd management, immediately asked to trade in her blue shirt for a red shirt even though she was not of the red shirt generation. She was told you don’t just “get a red shirt,” you “earn a red shirt.” 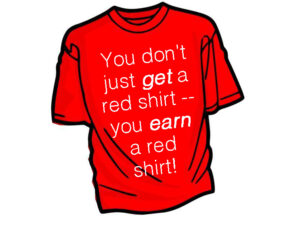 We hung out in a picnic shelter, abandoning all hopes of tablecloths or badminton due to strong winds. During lunch, a gust of wind whipped my sister-in-law’s paper plate out of her hands and into my face. The crowd was disappointed she hadn’t put mustard on her sandwich, as it would have been far more entertaining than the few breadcrumbs clinging to my cheeks.

For a moment, we thought red shirt intervention might be needed at the dessert table when someone put out a box of cookies labeled “Best Cookies Ever.” You don’t do that in a group of good cooks and think it will go unnoticed. It was settled without fisticuffs—there will be a cookie bakeoff next time we are together.

We talked and ate and watched the river sweep huge tree trunks downstream. Some swam in the hotel pool, others hiked a trail and rolled in the poison ivy. A storm blew in and we all trekked inside for dinner out of coolers.

We walked along the river before sunset, admiring a rainbow pinned to lingering clouds in a steel gray sky. My brother led the pack of kids singing, “We’ve Been Working on the Railroad.”

It was the watershed of gladness, the goodness of being together after several years apart and the tenderness of not knowing when we might all be together again.