Three of the grands painted a birdhouse that looks like a beach house on the Florida coast—hot pink with a teal roof. It was only up a couple of weeks before bluebirds moved in, laid three eggs and sometimes played Jimmy Buffet tunes late at night.

The family schooled themselves on elusive bluebirds, knew when the eggs hatched and counted the days until the hatchlings would leave the nest. Despite a faithful watch, they somehow missed the birds’ departure.

They cleaned out the birdhouse, installed a teeny tiny camera and a few weeks later the birds returned and deposited four eggs. 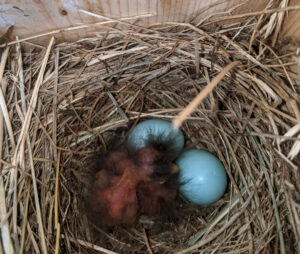 Again, they counted the time until the birds might begin exiting. When one leaves, they all leave.

Our daughter texted before 8 a.m. the other day, saying it was time. One had already flown the coop. Did I want to come watch?

Of course, I did. It would be like watching newborn quads leave a hospital.

Nobody saw No. 1 leave, but there it was sitting on the fence top. Then it took off, smacked into a neighbor’s house and tumbled to the ground. It was back on the fence a short time later. No. 2 also exited unnoticed and camped on a crossbeam of the fence, low to the ground.

My daughter and I, armed with four cameras, planted ourselves in patio chairs to catch the final two making their exit.

It was a large family affair as nine bluebirds, adults and young (probably from the first brood) hovered about, perching on rooftops, a nearby trampoline and fence posts.

They protested loudly when I crept into the yard for a better camera angle. I feared there would be a re-enactment of Alfred Hitchcock’s “The Birds” if I didn’t keep my distance.

We waited and waited. Clouds came and left.

Momma bluebird delivered food to the two cloistered in the birdhouse and popped a worm into the mouth of the one still cowering on the cross beam. 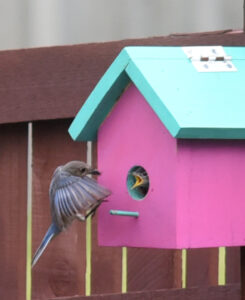 We waited and waited some more.

Bluebirds are tidy housekeepers. Adult birds carry out baby bird poo in a white sac held in the mouth. Perhaps they get the little white sacs at Target or Walmart, next to the 30-gallon Hefty bags.

Lunchtime came and went. We joked about phoning for Door Dash, wondering if they would do Backyard Birdhouse Dash.

Her older sister, in possession of their combined six children and not a big nature lover, texted that the birds were never coming out—they’d been in there too long and would require forceps.

Four uneventful hours later, I called it a day and abandoned the watch. Three hours later I got a call expecting it was the call of defeat.

It was hard to tell through the screaming, but it turned out she saw the last two exit, heads bobbing in the opening to the birdhouse, a final shove, then taking flight, one after another.

It took eight hours, but she saw the baby birds leave home and was over the moon with delight.

The wait on her own baby birds leaving the nest will be far longer, say in the 15-to-18-year range. No doubt, she’ll be emotional then, too.