Or the flames from beneath my rocket.

I am still wondering how you pack for a trip into space. You don’t need much because you can’t move around much. The Armstrong Air and Space Museum in Wapakoneta, Ohio, houses Neil Armstrong’s Gemini 8 capsule, which is unbelievably cramped. And, of course, in space there’s no getting out to stretch your legs. Well, you could get out, but you’d never return.

The Gemini 8 exhibit also details how astronauts contended with everyday matters like personal plumbing. I won’t go into detail but let me just say – gag. But Bezos will be up in space and back within 11 minutes, so bodily functions shouldn’t be an issue. 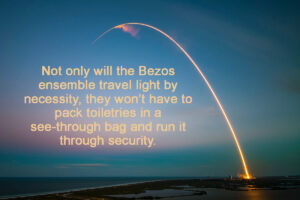 Not only will the Bezos ensemble travel light by necessity, they won’t have to pack toiletries in a see-through bag and run it through security. Or stand spread eagle and be wanded. Money does have perks.

It is fashionable to be hateful toward people who have a lot money today, which always comes down to anybody who has more money than you do. One of my favorite verses from Proverbs is where the writer asks that he never be so rich as to forget God, and never be so poor that he steals and profanes God’s name. Both poverty and riches are slippery slopes. We are content in the middle, although sometimes I do think, “Test me with riches, Lord. Just once. Let’s see how I do.”

Originally, Bezos was rocketing into space with fellow billionaire Richard Branson, but they turned the Rocket Man Vacation into Space Wars and now it is a competition to see who gets there first. Branson will be rocketing separately. Nothing ruins a vacation like taking separate rockets.

Bezos will be traveling with his brother and a chump who paid $28 million at an auction to secure a seat onboard as well. I shouldn’t have called the winning bidder a chump; that smacks of envy. I’m probably more hateful than I thought. We all are. It’s in the air and extremely contagious.

I know this based on a petition that, as of this writing, has been signed by more than 120,000 people demanding Bezos get out and stretch his legs when he’s in space. That’s right, they want him to take a one-way trip and not return.

Rocket envy. That’s all it is.

Another recent petition made headlines after 14,000 people signed it, calling for Bezos to buy Leonardo da Vinci’s “Mona Lisa.” And eat it.

No, there’s nothing wrong with us. We are perfectly fine.

Happy summer travels to you and yours, on ground or in space, and please, let’s all live within our budgets and leave the Mona Lisa alone.