Although family humor writers primarily write lighthearted stories, surely readers know that our family experiences the same difficulties, setbacks and sorrows as everyone else.

We recently attended three funerals in two weeks. The first one was on a Saturday morning. We dressed, drove to the church and were puzzled no other cars were in the parking lot. We were a week early. So really, it was only two funerals in two weeks, which isn’t good, but better than three.

The other funeral was for a friend who lost her father suddenly. Three days after her dad’s funeral she sat in a hospital waiting room as her husband had cancer surgery.

Even when your own heart doesn’t break, it breaks for others. Suffering is simply part of life.

Several of the grands have been sick recently and are now enjoying good health. I was across the table from one who fights fierce and lengthy battles with asthma and said, “I’m so glad you are finally healthy that I could throw a party.”

Her entire face lit up and she yelled, “WE SHOULD!”

We should, you know; we really should.

We are so fixated on the steady barrage of headlines of tragedies near and far that they all but eclipse moments of goodness right under our noses.

And so we partied. All 19 of us-with badminton games, kids on tricycles circling the patio, kids scaling a tree, burgers on the grill and pitchers of lemonade. 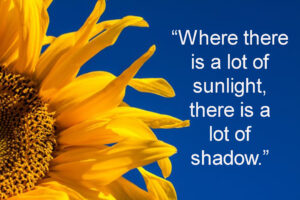 Best of all, we made homemade strawberry ice cream with a White Mountain hand-crank ice cream freezer now 43 years old. The metal parts are rusting and showing their age, but so are we.

Kids clamored for turns at the large metal crank with the wooden handle that turns the dasher inside the metal canister filled with milk, cream, strawberries, sugar and goodness, surrounded by ice and rock salt.

One kid cranks while another sits on top to hold the contraption steady. It’s always good to work as a team when you find yourself in a challenging spot.

As the ice cream mix grows colder and colder, the cranking grows increasingly difficult. Kids take turns that grow shorter and shorter. One of the sons-in-law notices and yells over to ask if we wouldn’t like an electric ice cream freezer for Christmas.

“This is a family tradition that goes back generations,” I yell, turning the crank with all my might. “Your family tradition is going to Florida every summer. I come from a long line of people willing to suffer for ice cream!”

Only the older kids take turns now and they are hanging tough. Nobody gives up. It is a sweet place to learn patience, endurance and fortitude.

Years ago, as a young mother with three children close in age, a husband who worked long hours, and occasionally at the end of my rope, a good friend who had grown up in Berlin calmly said to me: Wo viel Sonnenlicht ist, ist viel Schatten.” Thankfully, she also translated it. “Where there is a lot of sunlight, there is a lot of shadow.”

It’s true. You don’t get one without the other. Life is a constant mix and on a recent weekend afternoon, we were all together, healthy, happy, basking in the sunshine, eating homemade strawberry ice cream from plastic cups until we had brain freeze.