Facebook has been toying with plans for Instagram for children, declaring it would be a “parent-controlled experience” allowing kids to keep up with friends. Just the “experience” every busy parent is clamoring for, another online arena to monitor.

If you believe Mark Zuckerberg’s $114 billion fortune revolves around the best interests of parents and children, I have some asbestos to sell you. 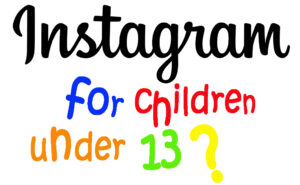 The truth is, Facebook is considering a platform for children because kids are one of their few untapped markets and every entrepreneur knows that the earlier you establish brand loyalty, the greater the chances of having a consumer for life.

Naturally, a platform for children would come with the same dangers of platforms for adults—personal data leaks, sexual predators lurking, and long-lasting loss of privacy, often accompanied by long-lasting regret. All the aforementioned are why Facebook has previously prohibited anyone under 13 from opening an account. But now, they’re rethinking things.

Is it healthy for 7-year-olds to be posting selfies?

How does an 8-year-old process an online snub or outright ridicule?

Will children post pictures of peanut butter sandwiches cut into the shape of hearts or go directly for the political jugular?

Shortly after the death of Steve Jobs, co-founder of Apple, a reporter who had interviewed him wrote a thoughtful retrospective. He recalled asking Jobs what his kids thought of the iPad after it had been released. The reporter was surprised when Jobs answered, “They haven’t used it. We limit how much technology our kids use at home.”

A number of chief technology executives have expressed similar opinions. A developer in the early days of Facebook has even expressed remorse for helping create the dopamine effect of the platform that keeps users coming back and wanting more.

Maybe children have all the platforms they need.

The great outdoors is a platform for exploration, adventure and discovery. Birds are laying eggs in nests; butterflies are fluttering and the cicadas are coming.

Gardening could be your platform; you never know until you try. If nothing else, you’ll learn a lot about squirrels and rabbits.

Most every home has a shelf or box jammed with craft supplies—paper, markers, paints, scissors and glue sticks. The platform is imagination. Go for it.

Books are a platform for time travel. Have a good trip.

Games can be platforms for developing logic, strategy and an acumen for property development.

Our youngest was in fourth grade when she had a friend over. The friend wandered into the kitchen, heaved a sigh and said, “We don’t know what to do. We’re —” Our daughter quickly put her hand over her friend’s mouth and said, “You don’t ever say you’re bored around our mom.”