Our wilderness wing of the family acquired four ducklings in an effort to expand their menagerie, which to date consists of a mouser cat built like an NFL linebacker, an extremely energetic black lab that in mellow moods doubles as a pillow for the little ones and a lop eared rabbit given free range as it is litter box trained.

Theoretically, the rabbit is trained.

I don’t argue with theory; I just watch where I step.

A flurry of activity made way for ducklings. First came building a duck house, a simple wooden structure surrounded by aging black hickory trees nestled near the edge of the pond. The duck house features a welcoming front porch, an eastern exposure to the morning sun and a roof that catches the pitter patter of rain. It is a miniature of the lake house of my dreams, although the lake house of my dreams is not surrounded by muck and mud where one false step sucks the boots plumb off your feet.

In any case, the idea behind the duck house is to give the ducks a place to roost and shelter from predators—and I would include the rambunctious black lab in that group.

The Cayuga ducklings arrived only days after hatching, four irresistible puff balls of brown down that will eventually turn a striking greenish black. They stayed in a box at first, then were promoted to the bathtub. They zipped the length of the tub back and forth like Olympic contenders madly racing for the gold.

Everyone who saw them thought to themselves, “You know, ducklings in the bathtub would be a nice addition at our place, too.” No one admitted it aloud, but we all harbored duck envy.

Several days later, cold and nasty weather circled back and we received a photo of one of the boys sitting in a chair, reading a book, a duck cuddled to his chest. 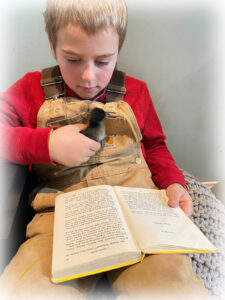 Sadly, on the Sunday morning after the ducks arrived, we received word that the tiniest one had died.

Several days later, I had a video call from our son and their youngest daughter, who just turned three. I tactfully said that I was sorry to hear one of the ducklings had passed.

“What do you mean passed?” our son asked.

“I’m trying to be sensitive to young ears present,” I said, nodding toward the towhead swaying in the hammock with him.

“The duck died,” he said matter-of-factly.

“Da duck died,” the little one said, echoing her daddy.

They both shot me looks of pity.

The toddler batted her long eyelashes and softly said, “We put da duck in a hole.”

And to think I was trying to shield her. It is probably better that she is exposed to the hard edges of life now, rather than grow up shielded, overprotected, and be taken by surprise when she is an adult.

Grandma was taking it hard.

I will try to toughen up before their baby chicks arrive.