We are dinosaurs who still have a landline phone. It sits in the family room of our home tastefully decorated with hieroglyphics on the walls.

One of us is a progressive dinosaur who periodically pushes for ditching the landline. But I am married to a beloved old-school dinosaur who wants to keep the landline because we could miss something important.

He then enumerates a half-dozen marvelous calls we would have missed during the past year if we had disconnected the landline. 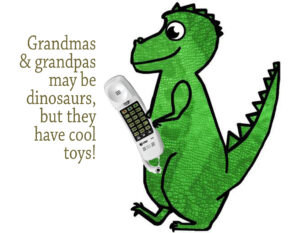 It’s hard to argue with a dinosaur in possession of a phone log.

Our landline is a tall, thin portable with caller ID and voicemail. I rarely answer it, but you-know-who runs to check caller ID whenever it rings. He rarely answers it either. The primary benefit of keeping a landline is that it provides exercise.

Some of the grands were over and discovered an old phone in a closet where we stash board games.

It is a Trimline, a sleek phone with lighted push buttons and a coiled cord that keeps you on a short leash. They wanted to know if it worked, so I unplugged the portable landline and plugged in the corded wonder.

I proceeded to call the landline from my cell, but the child kept picking it up before it had a chance to ring.

She set it down. Then she picked it back up.

“No, you have to put it down and let it sit there.”

I realized this child is of the generation that has never known a phone not permanently attached to its owner’s flesh.

She set it down once again into the receiver. Upside down.

I repositioned it correctly and again called the landline from my cell.

The phone let out a shrill, piercing B-R-R-R-R-ING and the kid shot straight up into the air; her eyes were wide with fear.

You can’t get this on an app, kids. Grandma and Grandpa have the coolest toys ever.

A few moments later, one of her sisters was passing though the kitchen when the landline let out another loud, shrill B-R-R-R-R-ING.

That one jumped into the air with an arc to her back as though she had been tackled. “What is that?” she yelled.

Soon everybody was vying for a go at answering the landline with the shrill, piercing ring.

Naturally, after receiving calls, they then wanted to place a call. They agreed to call their aunt but couldn’t because nobody memorizes phone numbers anymore. We’re all on speed dial.

I said they could find her number in the Rolodex on my desk.

“We’ll save that for next time, kids. This has been enough history for one day.”

Maybe their Grandpa will be home next time they stop by. No doubt, he has some old phone books stashed away somewhere. We’re in the book listed under “Fun.”