My greatest strength as a gardener is my willingness to uproot plants once they start to annoy me.

When it spreads, it lolls. It doesn’t stand up straight; it just sort of flops here and there with no respect for boundaries. The last thing I need when I’m working in the garden is to watch some plant lolling about when that is the very thing I’d rather be doing.

The year before that it was creeping thyme. I had gleefully planted a lot of it believing claims that it naturalized in a lovely way and would fill in nicely among rocks.  Fill nothing. It came, it creeped, it conquered. Smothered everything within reach. Besides that, it dried up, faded and looked like a mass of untamed hair in need of conditioner and color.

All gardening aggression aside, there are some plants I would never turn on. Hydrangeas are among them. I could never turn on a hydrangea. It would be ungarden-like. I feel the same way about moss phlox with tiny pink and blue flowers on a cushion of green. They will always have a home here. I put lilacs in that category, too. 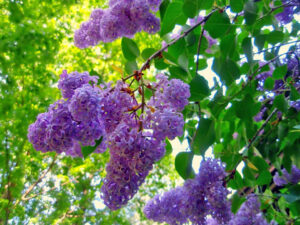 Lilacs are to be revered, then cut into beautiful bouquets and shared with friends or left on doorsteps.

I could never turn on anything that grows from a bulb either. Tulips, daffodils, crocus, hyacinth, I love them all. The only way I could love them more is if they bloomed all season.

Our youngest daughter is putting in garden beds and asked if I would give her some ideas. I’ve told her she overestimates my abilities. She scoffed. Then I reminded her of the lamb’s ear and creeping thyme incidents. There was silence on the phone.

The gardens she really needs are the kind my mother and grandmother planted. Their gardens more beautiful than those in magazines. The funny thing is, I don’t remember either of them ever weeding or watering. To the best of my memory, they simply stepped outside and threw seeds over their shoulders (entire packets of seeds, they didn’t even bother to tear them open). The next thing you knew freshly sliced cucumbers were on the dinner table alongside plump, red tomatoes and crisp radishes.

Jams and jellies appeared out of thin air. A short while later there would be pickles—all different kinds along with corn relish and sweet relish. Who knows how all that produce sliced and diced itself and squeezed into those pretty glass jars.

The details of how previous generations gardened may escape me, but I vividly remember going with my grandmother to the melon patch when I was very young. She gave all the vines a good watering, then stretched out her arms and melons jumped directly into them.

Sadly, I’ve never had the good fortune of previous generations of gardeners, but the real shame is I never learned where to find the magic seeds.