He was still in his jammies wolfing down breakfast cereal when he announced it was going to be a good day.

“Because Grandpa said he would take me into the crawl space.”

This was news to me. And to Grandpa. 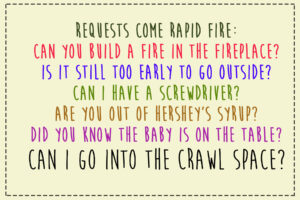 Grandpa had no memory of saying he would take the boy into the crawl, but the man blithely agrees to a lot of requests out of sheer need for expediency.

Requests come rapid fire when a lot of kids are here: “Can you build a fire in the fireplace? Is it still too early to go outside? Can we build a tree house? Can I have a screwdriver? How about some scissors? Can we play hide and seek upstairs? Do you have more tape? Are you out of Hershey’s syrup? Did you know the baby is on the table? Can I go into the crawl space?”

You can see how a request to go into the crawl space could easily slip into the myriad of other requests.

The crawl space is a hollow area below the first floor of our home. It is about four-feet deep and you access it by, well, crawling. You step into the window well, remove the metal panel to the crawl, then back in feet first into the dark. A few shafts of daylight spill into the first few feet of the crawl space, but for the most part it is as dark as a moonless night, creepy and crawly.

There are also neat things down there—concrete blocks that provide the foundation to the house, wooden beams that support the floors, insulated wiring, and pipes that run the length of the house, turning and connecting with other pipes.

What 6-year-old boy in his right mind wouldn’t want to go down into the crawl space?

Grandpa said it was below freezing outside, which was too cold to go into the crawl.

Grandma kindly reminded him that once they got into the crawl it could be more like the temperature of a cave, which is cool, but not miserable.

The boy put on his sad face and Grandpa relented.

They bundled up, lumbered outside into the cold and removed the door to the crawl. A small crowd gathered to watch as they disappeared into a pit of darkness. A little one whimpered softly; others wondered aloud if it would be the last we saw of them.

As for me, I returned to the warm kitchen and poured more coffee.

We could hear them bumping around down there, tapping on the kitchen subfloor, knocking into pipes, probing the mechanics of the plumbing and duct work for air conditioning and heat.

When the boy returned, siblings and cousins mobbed him to ask what it was like and what he saw. He had disappeared into the dark a mere 6-year-old and emerged a celebrity. He is the only one among them who has ever ventured into that dark hollow.

He may be young and small, but he now stands tall, King of the Crawl.