Valentine’s Day was the scariest day of the year when I was a kid.

It was before the Mandatory Valentine Edict went into effect—the rule that requires every kid to give every other kid in the class a valentine whether you like them or not.

Liking everybody else was not compulsory years ago. Oh sure, it was strongly suggested by your teacher and by your mother, but even so, the day of love could be a day of suspense and apprehension. You might get a valentine from every kid in class, or you might not. 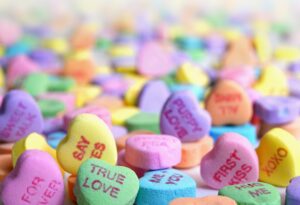 Adding to the pressure were the valentine boxes themselves. Everybody brought a shoebox they had decorated from home. Almost everybody. There were always some boys who brought unadorned shoeboxes, plopped them on their desks and shot a glare that said, “I dare anyone to put a valentine in here.” They were unofficial nonparticipants in the day of love.

I put my all into the shoebox—all the aluminum foil I could find to wrap the box and all the glue I could find for all the lopsided hearts cut from red construction paper. I dreamed of creating a box so stunning it would draw a crowd of gushing admirers around my desk, but the crowd was always at someone’s else desk. Someone who had paper doilies, silver glitter and pink pipe cleaners.

Counting the valentines you received was an exercise in both mathematics and deduction. First you ran the numbers to see what your return was, then you tried to deduce who didn’t give you one.

In those days, I walked to school with a neighbor boy named Big Bruce. He was big up-and-down and from side-to-side. Sometimes on our walk to school, a boy from my class named Mike would chase me.

I carried my lunch money in a small coin purse, which I would entrust to Big Bruce while I outran Mike. I don’t recall ever giving Big Bruce a valentine and I should have. A big box of candy, too. He was a fine bodyguard.

My mother said Mike was sweet on me and I suppose he wasn’t an unattractive boy, but still.

I thought I’d had a good Valentine’s Day at school. I took my box home and found close to a 90 percent return from my classmates.

I opened the valentines one after another—cute puppy dogs wearing red bows, cupids shooting arrows into hearts—then I saw it. A signed valentine. From Mike.

How could my archenemy, my nemesis, give me a valentine? I was sure he didn’t like me and now he had all but declared his love from the rooftops and proposed. What a mess. Second grade was ruined.

I was only 7 years old and a boy was already messing with my head. I’ve forgiven Mike for the signed valentine, but it remains the scariest Valentine’s Day ever.