Seems I see them more often these days, caps and jackets that say Vietnam Veteran. What always surprises me is how old the people wearing them look. I remember the guys going to Vietnam as being in their late teens and early 20s.

Then I catch my reflection in a window and am surprised at how old I look.

I was in high school when I slipped a small check into an envelope and sent away for a bracelet with the name of a POW or MIA.  I wore MIA Maj. Vladimir Bacik’s bracelet for many years. 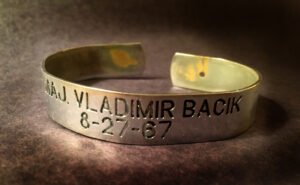 I prayed for him regularly. I never had many details about him or knew what he looked like. Until now.

I found him on the Wall of Faces on the Vietnam Veterans Memorial Fund website (vvmf.org). There’s a great picture of him with his wife.

My brother-in-law, marking the 50th anniversary of when he was in Vietnam, told me about the site. On the Wall of Faces, each page is dedicated to someone who didn’t make it home: name, date of birth, location and date of casualty, hometown, branch of service, rank.  There are wedding pictures and family pictures, a father with his small son. They have the same eyes.

Many of them look young.

My brother-in-law often scrolls through the Wall of Faces.  He could have been on the wall, too.

Some 2.7 million American military members served in Vietnam and some 58,000 died there. A lot of them, now in their 60s and 70s, are marking anniversaries of service there.

During the Vietnam War the U.S. dropped millions of gallons of Agent Orange. It was a highly toxic herbicide that defoliated forests providing cover for enemy troops. At the time, our troops were told it was safe. Decades later, Agent Orange was acknowledged to be responsible for serious medical conditions to those exposed, and even to their children and grandchildren.

My brother-in-law is close to five veterans made ill by exposure to Agent Orange. One, who died this summer, was best man at his wedding and a friend of 50 years. Another was an elementary school classmate now battling esophageal cancer and brain cancer. Two others were high school buddies. One has cancer and cardiac problems, the other has multiple myeloma. My brother-in-law has dealt with prostate cancer and heart problems in the past few years.

Vietnam is far behind us, but lingering battles remain in play.

I have an elderly uncle still living who was career Air Force and served in Vietnam. Mom read one of his letters from overseas at dinner one night. He described the sounds of bombs and explosions as he operated radio equipment in an underground bunker. I watched my dad’s reaction, as he was a World War II vet. He didn’t say anything. He was just quiet.

Mom tucked the letter behind a clock on the kitchen counter, where odds and ends sat until they made their way to the trash. When we closed out the house, we found that letter in a box with newspaper clippings about Dad’s brother who was killed in WWII. Some things we should never forget. Service and sacrifice are among them.

I’ve been hesitant before, but the next time I see someone wearing a Vietnam Vet hat or jacket, I plan on saying thanks.