The black snake, stretched out on the hard clay, was nearly five feet long. We stood watching to see if it would slither back toward the woods or toward the basement entrance of the house our son and his family had been building.

Our son’s father-in-law, a seasoned outdoorsman, looked at me with my hands over my mouth stifling screams and said, “That snake is just as afraid of you as you are of it.”

“Lies!” I thought to myself. “He’s a good man, but he’s lying!” I knew he was lying because at no time did the snake have hands over its mouth stifling screams.

He said the snake would not bother anyone unless it felt cornered.

Sometimes in life things are said that you never forget—that a black snake will not bother you unless it feels cornered is one of them.

Several weeks later our son’s family called to FaceTime with us. They were huddled together in front of the phone. The littlest one had something to say.

“Snake in dah cah,” she whispered.

The others sat frozen as Daddy Bear unpacked the story. He, Mama Bear and the five cubs were making another pilgrimage to the big box store in town for building supplies when Mama Bear, wearing sandals, felt something slither across her feet. She looked down and saw a black snake, whereupon she screamed, “Somebody ate my porridge!” No wait. Wrong story.

Mama Bear screamed “There’s a snake in the car!”

Papa Bear slammed on the brakes. Mama Bear reached into the backseat to open the latch on the minivan door, but the blacksnake was crawling up the door. The door by the 2-year-old’s car seat.

Daddy Bear and Mama Bear opened minivan doors from the outside and told the cubs to unbuckle from their car seats and run for it.

The cubs ran and the adult bears watched the snake slither along the passenger-side window and down out of sight. They flipped open the back gate to the vehicle.

The snake had coiled around a bolt anchoring the rear seat to the floor of the minivan. The snake was content. And why not? The snake had backpacks, jackets and shoes for cover, Cheerios, dried fruit snacks and bits of granola bars for snacks. It was four-star dining.

Papa Bear cajoled the snake with a long stick, but it wouldn’t move. Then, a large fellow the size of a Chicago Bears linebacker appeared and offered help. He pulled with all his might on the tail of the snake. He pulled and grunted and broke great beads of sweat, and finally the snake let go, flinging out of the car and calmly slithering away.

The snake was gone, and most of the kids were, too. Papa Bear said to Mama Bear, who still had trauma tears streaming down her face and a toddler on her hip, “Let’s get the kids and go. The big box is open for 10 more minutes.”

Sometimes in life things are said that you never forget. “The big box is open for 10 more minutes” will be one of them.

The way the husband talks, you’d think I was a racehorse.

He says I move too fast. I’ve yet to beat a thoroughbred, but he could have a point.

The other night I was invited to watch a movie outdoors with several friends on a patio. When the movie was over, I was the first to start carrying snack bowls into the house. I flung aside the screen to the sliding door and charged directly into the glass.

A gal coming behind me saw it, chuckled, and said she wouldn’t mention it to the others.

She didn’t have to. They heard it.

I’ve tried slowing down but it feels like a car that idles rough.

Our girls get on me for not drying dishes thoroughly. “Why waste time with a towel doing what the air will do naturally?” I ask, dropping a wet spatula into the utensil crock.

I’ve also been told to stop jumping on the counter to get at the top shelves. I should go get a ladder. I’ve gotten what I wanted, am off the counter and revving up the mixer by the time someone else finds the ladder.

Because I walk fast, I shop fast. That’s how we came to own two large bottles of bodywash that we will never use. I thought I’d finally found large refill bottles of liquid hand soap. Speed also enables me to score avocados that are rock hard and tomatoes that are mush.

Moving fast has brought me a life filled with color. I often sport a big black and blue mark on my left arm from clipping the side view mirror on the SUV as I speed by it to dump a bag of trash in the garage.

I return inside moaning and holding my shoulder. “Pace yourself,” he says again. It’s like a Ring Doorbell that constantly chimes.

Speed has also enabled me to be at the front of the pack doing word scrambles.

I will admit that a penchant for speed as a writer can result in typoes and gramatcal errs. I can bring retired English teachers to tears.

The husband, who is moderately paced, was frantically dashing about the house the other day, flying in and out, racing up and down the stairs.

After a career in newspapers, he took an early retirement buyout several years ago and has been living the easy life.

Perfect. The man has just given me a defense for moving quickly. I’m on deadline, too. We’re all on deadline, which is why I will continue to stand, or walk briskly, in defense of speed.

One final nugget before I close my case: Secretariat wasn’t a Triple Crown Winner because he moved slow.

Our oldest daughter and I are on the deck of a rented lake house eyeing kids scattered on the shoreline below. They, in turn, are eyeing three bright red kayaks.

“Not one of them has experience,” she says.

I nod and the trees around us nod, sending a flurry of burnt orange leaves to the ground.

“They do have life jackets,” I say.

Our son appears on the shoreline. His appearance doesn’t exactly trigger a sigh of relief.  He’s not known for holding back.

“The water is incredibly cold,” she muses.

The kids cluster around one of the kayaks below.

“Those things can tip so easily,” she continues. 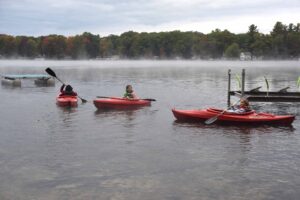 A cheer rises from below as our son shoves a kayak holding his 9-year-old into the water.

“Has he kayaked before?” I yell down.

There it is again, the balance and counterbalance of safety and risk, moms often tilting toward safety, dads toward risk, differences somehow complementing one another.

The kid in the kayak may only have been out once before, but he has mastered the hang of things. He cuts through the water, paddles dipping in and out in a smooth and graceful rhythm.

A short while later, his 7-year-old brother shoves off, followed by their 11-year-old sister. It is a first for them both. They quickly get the hang of it as well, though a bit later the 11-year-old tips her kayak close to shore. It seemed intentional. Maybe she just wanted a practice run with disaster in shallow water. She laughs all the way up the hill to change into dry clothes.

A 10-year-old, who has been standing on the shore quietly watching, announces she’s ready. She buckles up a life jacket, climbs in and takes off. In and out, in and out, paddle right, turn left, paddle left, turn right. She learns by observing.

Her twin learns by doing. She, too, is soon in a kayak, paddles slapping the water, the water slapping her. She sticks close to the shore and a few minutes later is climbing out of the kayak, trekking up the hill to the house, her entire backside soaked to the skin.

When you lift the paddles too high, water runs down them and into the kayak. Don’t ask how I know this. A number of trips were made up the hill for dry clothes and not all of them were made by kids.

By the next day, nearly everyone has been out on the water, adults and older kids in kayaks, little ones with moms and dads in paddle boats. The one who learns by watching now moves with ease. The one who learns by doing ventures farther from the shore. The one who first rolled her kayak has now tipped three times in shallow water, enjoying each bit of drama more than the one before.

They all leave with damp clothes in backpacks and duffel bags savoring a new layer of confidence known as the reward of risk.

I’ve always been sorry I don’t know more about the stars and galaxies.

I was especially sorry a few weeks ago when I went out early one morning and saw an incredibly bright light in the eastern sky. It was so brilliant I wondered if it was a UFO.

Good thing I Googled it when I went back inside instead of phoning it in. It was Venus.

I am downright envious of people who can confidently point out the Big Dipper and the Little Dipper. Sometimes I think I’ve found them, but then I link all the stars and wind up with two slotted spoons instead of dippers.

One of the grands who lives in the country where stars blaze deep into the dark showed me where the family stretches out on the deck at night to watch the space station.

Maybe that’s what I need for star gazing, a house in the country, a 30-foot-long deck and trees with bag webworm.

I had opportunity to learn about the stars as a kid when I was selected to go to a 2-week summer space camp. We made papier-mâché planets and astronaut helmets from empty Baskin-Robbins ice cream containers. My most vivid memory of space camp is the smell of mint chocolate chip. 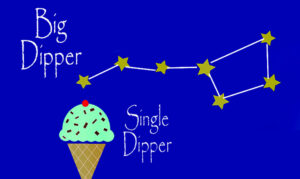 Learning about astronomy is something I’ve been “gonna get to,” but somehow never have. The first obstacle is overcoming the embarrassment of checking out books from the children’s section of the library. I should probably start with one of those touch and feel books without words and work my way up.

The second obstacle is that my wobbly sense of direction on land is magnified 500 times in space. The North Star, also known as Polaris (and I hope that impressed someone), is an enigma.

People point it out to me. I gasp. Then I ruin the moment asking for proof they are certain. Do you look north to find it or straight up?  What if you’re looking for it from the Arctic Circle? Do you look to the south to find the North Star? I weary my tutors and often find myself standing alone in the dark. Under the North Star. I think.

I am finally getting serious about the stars having downloaded the SkyView Lite app. I trained it on that early morning eastern sky four days running, and it confirmed the bright light as Venus.

“I’ve found Venus!” I shouted to all the sleeping neighbors.

I’ve also found a warrior wielding a sword and another fella armed with a bow and arrows. Apparently, there is as much fighting going on in the galaxies, as on the earth.

Progress is slow, but I now know the North Star is part of the Little Dipper. There’s rarely a night I don’t look at the stars and wonder – if there’s mint chocolate chip ice cream in the freezer.