Two years ago, our daughter, son-in-law and their three small children moved in with us for seven months while they were between houses. We were feeding seven a day.

Now our son, daughter-in-law and their five children have moved in with us while they are between houses and we are feeding nine a day. I try to look at it as a promotion.

Some children pick at their food and others shove it around on their plates. These children are not that sort. They enjoy food and appreciate food.

When I scramble eggs for breakfast it’s a dozen and a half at a time.

We need chickens. Free range would be good. They’d complement the free-range children.

They are also heavy drinkers. If I bought enough milk to last all week, there’d be no room for anything else in the ‘fridge.

How did women a generation or two ago feed families this size and larger?  I should have paid more attention to my grandmothers. And they did it without the aid of freezers, microwave ovens, dishwashers and grocery stores minutes away.

As I grow accustomed to routinely cooking for a larger crowd, I find my inner domestic diva has died. She has gone to a better place, one where the kitchen gleams, the refrigerator door does not have crud on the handles and kitchen windows are not covered with greasy hand prints.

That said, sometimes a faint echo of Martha Stewart is still in my head saying snide things when I make sandwiches for lunch and serve them right off the cutting board.

Yesterday, feeling guilty about presentation, I put a piece of parchment on the cutting board before throwing on the sandwiches. Two of the kids asked if company was coming.

There was a time I served melon in wedges with uniformly cut pieces nesting in the rinds. Now I chunk up a melon, dump the pieces in a bowl, throw down some toothpicks and tell them to spear what they want. Victory goes to the swift. So does the melon.

Somedays I’m so weary that I use paper plates. I feel guilty using paper plates with the waste and all, but I rationalize that feeling guilty is better than feeling dead.

I am concerned that my standards are now so low that I am a poor role model. We celebrated a family birthday the other morning with 11 cousins and donuts on the patio. I took out a large bowl filled with water and a roll of paper towels, announcing it was a finger bowl. Two kids immediately dipped their fingers and you could no longer see the bottom of the bowl.

When they were finished eating, I heard one of our daughters tell her kids to just dip their faces in the finger bowl.

Once again, we were working on the house our son and daughter-in-law are building and must have ready in two weeks for inspections. We are not skilled construction workers. We are not even semi-skilled. We are below low-skill and just above no-skill but our rates are reasonable. Free.

I looked up from a doorknob I had finished installing perfectly—perfectly backward—and saw our daughter-in-law’s father pass by wearing a fully loaded tool belt. It had three tiers to it, countless pockets, assorted clips and buckles. The man was a walking hardware store with hammers, drills, a crowbar, screwdrivers, wrenches, ropes, squares, measuring tapes and a jigsaw tucked in pockets and swinging from hooks. He could go anywhere on the site and have whatever tool he needed within seconds.

In some ways a tool belt is like a purse, but a tool belt makes no pretense of fashion; it is completely utilitarian, existing for the sole purpose of getting the job done. The real perk of a tool belt is that you don’t set it down and walk away, leave it in the car, or at a friend’s house because it is attached to you.

A domestic tool belt could be an incredible step-saving, time-saving asset in the home. 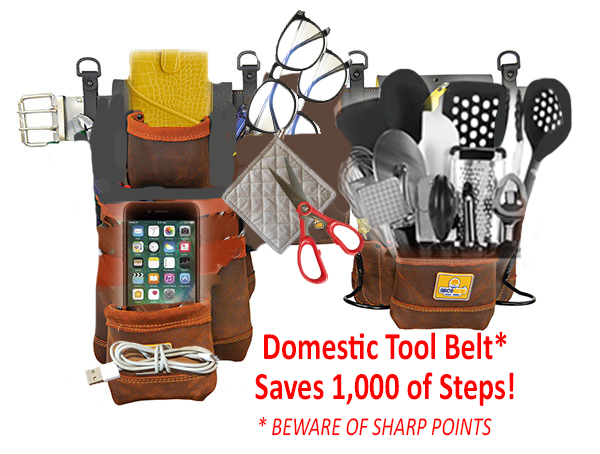 The first tier of pockets on my domestic tool belt would hold the ever-essential cell phone, charging cord, reading glasses, backup pair of reading glasses for when I lose my primary pair, and ugly shoes with orthotic inserts for when my cute shoes hurt. You don’t want shoes near other things so I would probably bag them and let them swing from a clip-on hook.

Note to self: Be careful about bending over with sharp points nestled next to your stomach.

Because cleaning causes thousands of extra steps, I would also strap on a collapsible broom, dustpan, small wet mop, furniture polish, dust mitt, window cleaner and roll of paper towels. Naturally, implements that collect dirt and dust should be kept separately, so they’ll be clipped to hooks on the back of my tool belt.

Note to self: Be wary of overstretching to reach cleaning supplies behind you.

The more I think about this, the more I like it. As long as I don’t bruise my backside with swinging shoes, bend over and puncture vital organs or dislocate my shoulder reaching for window cleaner, it’s going to be a great system.

I’ll let you know how it goes.

Hopefully, not from an urgent care clinic.

When our two daughters were 10 and 12, they spent hours during the winter in a closet next to the furnace making detailed plans for hosting a summer camp. They invited children for whom they babysat, and the backyard summer camp filled up every year for two weeks a year for the next nine years.

My role was supervising bathroom traffic and being available in event of an emergency, which we fortunately never had. Of course, no one would do such a thing today without liability waivers and umbrella insurance policies, but that was then and this is now.

Camp often ended with the girls bickering over which one was being bossy and who needed to clean up what and then they both collapsed in exhaustion on the sofa.

Camper screenings this time around were not about asthma or food allergies, but math computations on how many people each camper and their family had been exposed to, multiplied by the number of people the other campers and their families had been around. The results were a satisfactory small number and camp commenced.

Two of the three moms, er, camp directors, have worked as teachers and the third as a physician assistant in cardiology. One of the teachers did a science project each day and the other a craft, both outdoing themselves with years of experience and resources, while the physician assistant provided snacks and was on standby for first aid.

Science time was over the top with lessons and activities on chromatography, centrifuge, sound waves and plant parts.

But science was overshadowed by a relay race where campers passed a cup of water overhead, often spilling it on someone else’s head.

The crafts were clever, cute, and creative, but they were eclipsed by a contest where players dunked a sponge in water, ran it to a bucket and squeezed it out. The first team to fill the bucket won.

Every craft, science project, story and song evaporated under the heat of the summer sun next to the glee of dumping entire buckets of water on each other’s heads. You want water? You got water!

The ultimate hits were water balloons and a pinata on the last day, which was followed by spraying each other down with the hose and more buckets of water.

All that to say, if you’ve missed summer camp this year, turn the kids loose with a garden hose and it will be time for school to restart before you know it.

Oh, and the really good news—the camp directors didn’t bicker this time around, although they did collapse in exhaustion after the last day.

It has happened again – another blob of spaghetti stuck to the kitchen wall. Same location—in the corner next to the highchair. Same suspect—round face, great smile, chubby legs, chubby cheeks, 18 months-old.

The abstract art on the wall escaped notice for the better part of a week and fossilized. We should probably put a frame around it and title it “Family Dinners.”

The real puzzle is how it stuck and that a mound that size did not fall to the floor. Gravity has failed us.

We had a book when our kids where young titled, “Teaching Children Manners in 10 Minutes.” It overestimated their attention span by nine minutes.

Now, with nearly a dozen grandkids often around the table, we are taking a second run at teaching manners, periodically reviewing basic rules of courtesy so that mealtime is not a three-ring circus.

For starters, no clowns in little cars circling the table and no trying to lift a cousin in a kitchen chair over your head.

Please remember that the small lighted candles in the center of the table are not so much for ambiance, but to discourage you form lunging across the table for food you want.

When eyeing the last portion of something on a serving plate, ask if anyone else would like it. No sulking when someone says yes and offers to share it with you.

Please laugh at the little kids’ knock-knock jokes, even if you heard them before, and don’t blurt out the punchline.

Note that only the babies eat with their hands, everybody else uses a fork. The same goes for rubbing food in your hair. Babies only.

Try one bite. Please. Thank you.

No yelling, screaming, shouting or name calling at the table. This is mealtime, not a political rally.

Don’t forget you earn extra points for saying, “Grandma is a good cook,” and taking your dirty dishes to the sink without being told.

Naturally, to encourage thoughtfulness, we practice thoughtfulness. We don’t buy orange juice with pulp — or “hairs” as they say, and we don’t give them sandwiches on bread that “crunches” (12-grain).

We make sure there is always chocolate syrup to go in the milk and promise Grandma will make cinnamon rolls for the morning when they stay overnight.

A small brood was here recently when I hopped up from the table to retrieve a dish by the stove. When I returned the kids were sitting quietly and one said, “Did you notice, Grandma?”

“We waited until you sat down and took a bite before any of us took a bite. You told us it’s polite to wait for the hostess to take the first bite.”

Ice cream for everyone!