The husband has a “Best Grandpa Ever” hat. I happen to know that the same kids who gave him that hat also gave one just like it to their other grandpa. “Best” isn’t as exclusive as it used to be. 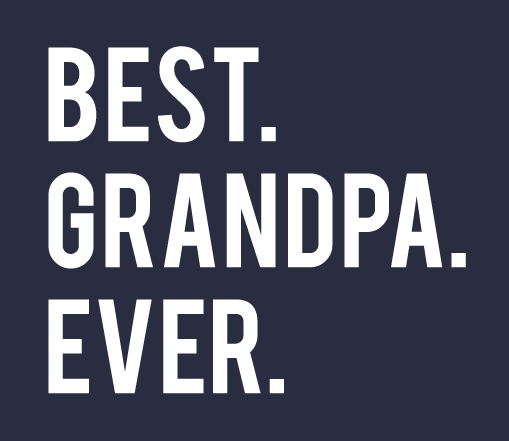 I wonder what would happen if every grandpa wearing a “Best Grandpa Ever” hat or T-shirt ran into one another at a large gathering. Would they have a Grandpa Showdown to determine who is the best once and for all? What would a Grandpa Showdown look like?

I imagine it would include older men giving kids horsey rides on their backs, holding kids’ hands while letting them walk up their legs and then flipping them around.

Grandpas could also toss babies in the air and catch them. In a process of elimination, grandpas would be ejected from the contest the instant the babies’ mothers yelled, “STOP THAT RIGHT NOW!”

A Best Ever Grandpa game show has possibilities featuring an entire category for Creative Greetings and Farewells. One grandpa we know stands by the family car when it leaves and runs alongside the car throwing little plastic dinosaurs in the car at the kids through the open windows.

I was at a funeral where someone mentioned the deceased always kept a pack of gum in his shirt pocket for his grandchildren. It was so sweet and touching, you could hear soft sobs. Surely, I wasn’t the only one crying.

There could also be cooking categories including a milkshake contest based on speed and another competition for baking frozen pizza the fastest.

Moms and grandmas don’t seem to receive as much of that “Best Ever” line of gifts and clothing. Although, I do have a fluffy white bathrobe monogrammed “Best Grandma Ever.”

One of our daughters saw me in it and asked who gave it to me.

“Why does it matter?” I asked.

“You bought yourself a robe that says ‘Best Grandma Ever’?”

“Yes,” I said. “I bought the robe online and saw you could get it monogrammed for only a few dollars more. One of the sample monograms was ‘Best Grandma Ever.’ So, I got it and I love it every time I wear it. Sometimes even a grandma needs a little pick-me-up.”

She looked bewildered, so I reminded her about the time that her grandmother, my mother, had an on-line credit with a florist. She was feeling weary one day, so she used the credit to send herself a cheery bouquet with a note on the card that said, “Get Well Soon.”

“It looks like a delivery truck outside,” my daughter said. “Maybe a florist?”