Now that panic buying of toilet paper and hand sanitizer is subsiding, people are moving on to the next phase of panic buying—hair clippers. Sales are moving at a fast clip.

Hair dye is also a hot seller. Covid gray is an official color.

Home barbers and hairstylists are sprouting everywhere. I am among them. I’m even contemplating a salon name. My two top contenders are “It’ll Grow” and “Oops!”

A neighbor cut her husband’s hair with kitchen scissors and a comb. She started the cut two weeks ago and still hasn’t finished. Every time she sees a spot she missed she tells him to sit still and cuts a little more.

His complaint is that he has no hair on top. The man hasn’t had hair on top for five years, but now he has someone to blame.

I used to cut our son’s hair when he was little. The key is to start with the trimmers on the long setting, then move to progressively shorter and shorter settings to cover your mistakes.

As an adult, our son asked why he is bald in all the old family photos. I told him his hair was late coming in—age 14 is normal for some kids.

He and his wife have their own set of clippers. In an online family get-together, their two boys displayed fresh haircuts. The sides of their heads were shaved with a strip of longer hair on top.

Then our son took off his ball cap displaying the same cut.

I offered them use of the “It’ll Grow” name for their home hair salon.

Our son-in-law saw the haircuts and thought why not? He’s working from home and wouldn’t be seeing anybody soon. His wife revved up their clippers, rendered him nearly hairless on both sides, leaving a thick bushy strip of hair on top running down the back of his head. He looks like a bald guy wearing a squirrel on top of his head. A handsome bald guy wearing a squirrel on his head, but nonetheless. 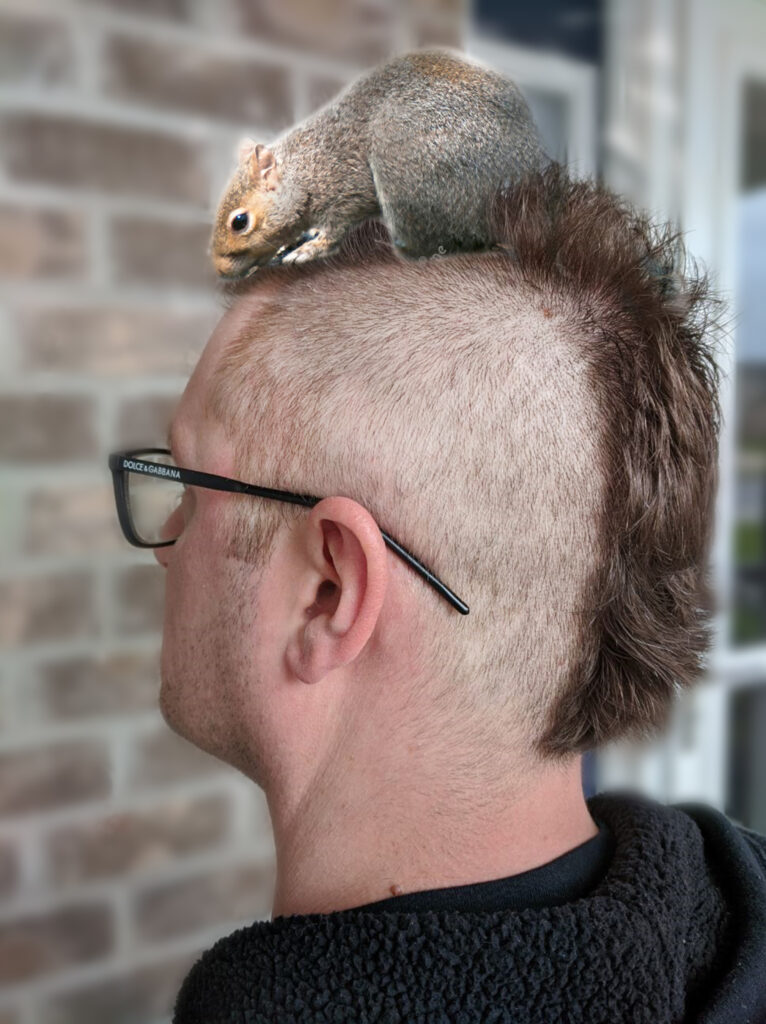 Photoshopped. Thankful our son-in-law has a sense of humor.

A few days later, he received notice about an online conference call. Higher ups at the company he works for wanted to check in with different division managers. He was invited to video chat—with the CEO.

He adjusted the computer camera so the top of his head was out of view. The CEO probably thought he was super eager about the call.

I mentioned to the husband that his hair is getting long and that I could fix that for him. He flashed on the haircuts I used to give our son and recoiled at the suggestion.

A few days later I looked over at him and gasped.