The hardest part of social distancing during a pandemic has been ignoring the little table and chairs in the living room that periodically heave deep sighs of loneliness. 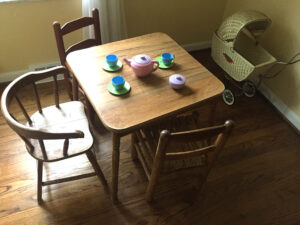 Then there is the basket of children’s books I step over each morning when I raise the shades. They’ve grown surly. Some days “The Hungry Caterpillar” nips at my legs.

On Sunday, I texted a list of my accomplishments to the daughters, just to let them know things are happening at a breakneck pace here, despite the isolation: 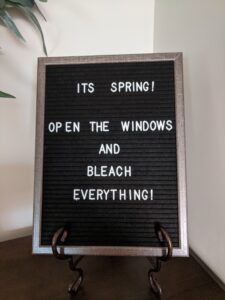 The first and only answer I received in response:

Made kids read in separate rooms

Many of the grands have been doing a great deal of travel despite staying at home and attempting to drive their parents batty. Last week all 11 of them had ballet lessons with the Cleveland Ballet from 2 to 3 in the afternoon, followed by a tour of the Cincinnati Zoo at 4. Normally you couldn’t make it from Cleveland to Cincy that fast, but Facebook works wonders.

Some popped in at the National Eagle Center in Wabasha, Minnesota for an update on bald eagles that follow the Mississippi River. 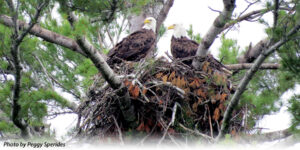 After that they dropped in for a tour of impressionism paintings at the Musee d’Orsay in Paris.

There have been music lessons with Zoom and even a jam session for strings.

We shrank the distance between us and the Chicago brood with FaceTime the other night. It was good to see them—up their nostrils, into their eyeballs, close-ups of their tonsils, the ceiling fan, the floor, the ceiling fan, the side of someone’s face smashed against the phone and back to the ceiling fan and overhead lights. It wasn’t the first time a virtual visit caused motion sickness.

The occasional shared video, having some cyberspace family time and “coffee with friends” via cellphone all help to fill the void.

For now, the best way to love one another is to stay away from one another. It is a small thing to do if it helps break the chain of transmission and lessens the suffering and death.

The little table and chairs are sighing again.