We stayed at the Mark Twain Hotel in San Francisco on our honeymoon. It was very romantic. The room had a lovely view of the night sky. Not because it had a skylight, but because there was a hole in the ceiling.

I once surprised the husband with a short ski trip when we lived in the Pacific Northwest. I booked us a night in what was described as a “rustic cabin.” They weren’t kidding. It had no heat.

We’ve had more than a few surprises when it comes to lodging. The biggest surprise happened recently when some of the grands invited us for an overnight at their house.

They told us it would be like staying at a hotel. Knowing that they have a good roof and no household pests, we said yes.

Upon arrival we were given a key card made from construction paper to Room 208.

“Top of the stairs and to the left,” one of them said.

A hand-written sign taped to the banister said “HOTLE” and had an arrow pointing up. 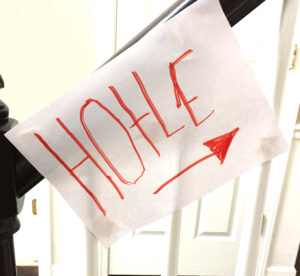 We trudged up the stairs and opened the door to 208 with three kids stepping on our heels.

“Here’s a basket with stuff you might have forgotten.”

In it were two bottles of water, two toothbrushes, a tube of toothpaste and peanut M&Ms.

They also pointed out that they had stashed a piece of candy under both of our pillows and said we could eat them now if we wanted.

The best part was a large handmade sign written in crayon. It read:

“Welcome to The Best hotle IN Town. Why?”

They explained we could have free popcorn anytime we wanted it. It’s always good to know popcorn is available and that your family won’t charge you for it.

Those amenities would have been more than enough to rate a top-notch review, but they listed one more reason why it was the best “hotle” in town. 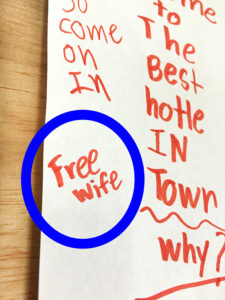 The husband saw it first and wanted to know where she was.

Funny guy. He can hardly manage the one he has now. Two wives would be the end of him.

The girls giggled and stammered and explained it was for the computer. Well, then he expressed surprise that he would be getting a free wife AND a computer!

He may have scared them completely out of the hotel business. If they ever host us again, the amenities will likely include nothing more than a tiny shampoo and tiny conditioner.