Looking back, burping the owl was the first mistake.

Cueing the barking dogs was the second, but I’m getting ahead of myself.

Or we can just ask the rabbits to pull the weeds for us.

Last year, one of the little ones asked if we could buy a strawberry plant. We did, fully expecting it would die and we would have thrown good money out the window, but the kid was asking for a strawberry plant, not a pony or a video-game console, so we bought It.

The plants produced berry after berry, all of which were bright red and beautiful, and none of which we tasted. But the rabbits did. Every single one of them. Those would be the same rabbits that steal our lettuce and cherry tomatoes after dark and make lovely salads of mixed greens with a light vinegar and oil dressing while we sleep.

We were going to beat the rabbits at their game this year. The berries would be ours. We bought a large plastic owl and positioned it by the strawberries. The owl is ferocious looking with beady eyes and steely glare. The theory is that owls are predators that frighten rabbits. But you know how theories work. 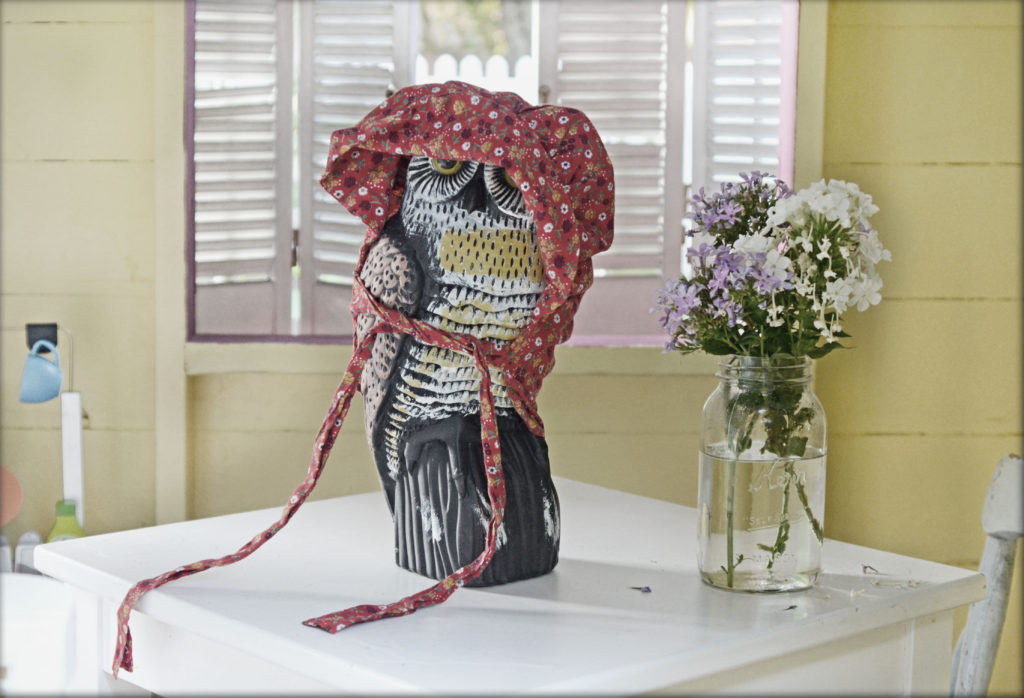 We never had a chance to test the theory as one of the grands picked up the plastic owl, began carrying it about, patting its back and trying to burp it.

“Put that down! That’s not a baby doll, that’s a ferocious predator!”

She started calling it, “Baby Owl.”

Any predator loses a modicum of ferocity when its first name is Baby. A predator is even less fearsome when it wears a sun hat with a ruffle. And, once an owl has been seated in a little chair for milk and cookies in the playhouse, it becomes a laughingstock. Rabbits jumped out of hiding smirking from ear to ear and guffawed so hard their tails shook.

My second line of defense was to play an audio clip of barking dogs. Talk about ferocious. I hit play and cranked the volume. The rabbits were startled.

We had them now. Or did we?

They moved closer and closer. Two of them parked beneath a bush and appeared to enjoy the canine chorus.

I halfway wondered if they were waiting for shortcake and whipped cream to go with the strawberries.

Wait all you want, rabbits, it’s not berry likely.