Holidays do strange things to people. Take Halloween—it made me think I can sew.

I was driving one of the grands home and she was rattling off what everyone was going to be for Halloween. She said she really, really, really wanted to be a mermaid this year, but she couldn’t.

“I don’t have a costume and Mom said we’re not spending money on Halloween costumes.”

“You could make one,” I said, slowly inching toward a giant sticky trap for humans.

I glanced in the rearview mirror. Her eyes drooped, her mouth drooped, even her little shoulders drooped. She was resigned to the fact that she would not be a mermaid.

“I could probably make one out of things you buy at JoAnn’s,” she said wistfully, “like that JoAnn’s we’re driving by right now.”

She didn’t ask, she was just dreaming. And then I began dreaming with her. Actually, it was more like an out-of-body experience, because I heard my voice say, “Maybe I could make you a mermaid costume.”

Did I mention I haven’t sewn in a decade? That, even when I did sew, I turned most of my projects into square pillows?

“Really?” she squealed. Her cheeks flushed with roses, her eyes danced and her smile sparkled. She was ecstatic, like she’d just won the Publisher’s Clearing House Sweepstakes.

“You’ll probably have to find out how to make one,” she said, bubbling with excitement. “When do you think that would be? Want me to call you tomorrow to find out? What time should I call?”

The kid had visions of a glittering Disney mermaid costume and I was wondering if Duck Tape comes in green.

“I’ll think about it tonight and call you tomorrow afternoon,” I said.

My phone rang the next day at two minutes past noon. It was Excitement calling.

Not quite. I’d found something on Pinterest that looked doable—doable for someone with patience and talent, both of which I had none. 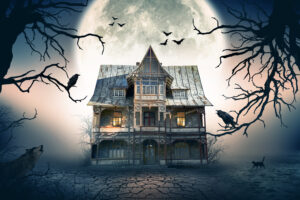 That night I battled a monstrosity of pink netting that kept growing and growing, filling the entire kitchen. As I rethreaded the sewing needle for the 13th time, neighbors may have heard screeching piercing through the windows. That would have been me asking an empty room why the mermaid’s mother didn’t just buy her a costume!

If a little girl comes to your door trick-or-treating and looks like she’s wearing a giant green tube sock with uneven pink ruffle at the bottom, it’s one of my grands.

For the love of children, pretend you think she looks like a mermaid.

I told her not to let anyone examine her costume up close because I don’t want others taking my good ideas. And that she should walk fast, but take tiny steps.

The costume isn’t great, but it may do the trick.