It has been an uneventful week except for Wednesday, when the chair I was sitting in collapsed.

When you hear something like that, the natural response is, “For goodness sake, woman, how much do you weigh?”

To which I, the woman, would reply, “None of your business, but apparently enough to collapse a chair.” 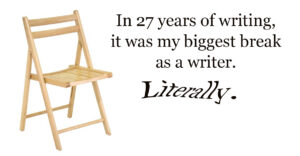 You may have heard that I am still carrying several extra pounds from my last pregnancy and that would be true. And, yes, it also would be true that the baby from that last pregnancy is now 32 and has two babies of her own, but let’s not get caught up in the numbers.

I lay blame on the chair, not the woman in the chair.

The chair was one of two the husband scored at an estate sale years ago. It is (or was, I should say) a small, wooden folding chair, the sort that was popular decades ago and is sometimes still used for seating at frilly romantic outdoor weddings.

In my defense, both small wooden folding chairs have been used many times at family gatherings, often occupied by male relatives a full foot taller than me and many, many pounds heavier. Who knows, maybe the fellas weakened the chairs. I like where this is headed.

In any case, I have used one of the small wooden folding chairs in my upstairs office for two years. There I was, fingers flying across the keyboard, when I hear an awful racket and find myself on my back on the floor.

The husband heard the racket and hollered, “Are you OK?”

I was OK, but not wanting to waste spectacular drama on an empty room, I replied, “Why don’t you come see?”

After helping me up, my beloved asked what I had done to the chair.

Had I been bouncing on it? As if I often bounce up and down while I write, particularly on a small wooden chair.

Had I been standing on it? As if I stand on wooden folding chairs.

Ordinarily, I would object to such a line of questioning but he was as bewildered as I was that a chair could completely fall apart in every direction. I think the glue in the joints simply dried up and gave way.

The husband, who would always rather try and fix something than throw it in the trash, mournfully carried the chair parts to the trash. He enjoys old artifacts that have been gently loved and have a rich history. I’m counting on his fondness for antiques to work in my favor as I age.

But right now, I am working on my resume as a stunt double.