She was sitting on a little wooden chair beside the piano, tapping her feet on the floor.

I finished my phone call and walked over to her, puzzled that her head was bent and she was looking down. It was an unusual posture for the kid who proclaims every single day of the year, no matter how dark the clouds, torrential the rain, searing the heat or bitter the cold, to be a “beautiful day!”

“What’s up?” I asked, kneeling to look into her eyes.

“Well, I was outside —” she drew a breath and appeared to stifle a sob.  “I was outside with the broom sweeping by the garden.”

Her chin trembled and her eyes began gushing tears as she wailed, “ 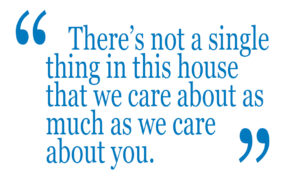 I broke the broom!”

“Look at this old piano. See these scratches on the side? This piano has been around a long time. It’s just wear and tear. Even if this entire piano somehow got broken, do you think we’d care about it more than we care about you kids?”

I realized it was ludicrous to use an example of a piano being destroyed. But then, reflecting on several of her male cousins, maybe it wasn’t ludicrous. Even if it was severely damaged during some bizarre boy antic gone awry, we’d still choose the kids over the stuff.

Her sobbing softened to whimpering, which was a step in the right direction.

“Come with me,” I said, leading her by the hand. “Sit down in the middle of the sofa.”

She sat down and a spring went BOING. She smiled a little half-smile.

“Now sit over there on the end. Hear that crack? That’s the wooden frame! A lot of kids have played on this sofa, crawled over the back, rolled off the cushions.” I didn’t mention that I often stand on the end of it to reach books on the bookshelf.

“What do you think we care about more? The sofa or kids?”

“And look at that screen door.”

Suddenly, I realized the house may be in worse shape than I thought. Oh well—such is the price of life and the joy of family.

Finally convinced, she scampered back outside. A little later, I saw the “broken” broom on the patio and called to her.

“That broom was made to come apart,” I said. “The handle and broom are separate pieces. You didn’t break it—it just came apart!”

My lecture on the value of stuff as opposed to the value of people was probably unnecessary. But sometimes it never hurts to be reminded of what truly matters. It makes for a beautiful day.