The parking lot for tourists is nearly empty when we arrive. We are alone on the pathway cutting through the Virginia woods this morning. We descend stairs and more stairs that drop sharply. This path and these stairs were not here 250 years ago when others wove their way through this forest. They were carved into the hillside by men and machines that followed many years later.

About a hundred steps down rests a giant gnarled tree trunk. The trunk is a marvel, pained and arthritic looking with exposed roots resembling claws. The aged and weathered bark ripples like thick strands of coarse hair. 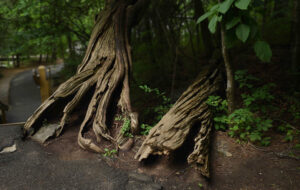 The fallen tree is time’s reminder that there was life long before us. It is nature’s way of whispering, “It’s not all about you.”

I learned of this place reading Ron Chernow’s biography of Washington. Chernow says the story of Washington throwing a coin across the Potomac is merely a legend. However, Washington did throw a rock over the top of the Natural Bridge, a 215-foot limestone gorge carved out by Cedar Creek. 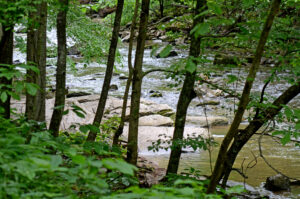 Washington had amazing arm strength. He also had powerful thighs, which made him an excellent horseman. Strange, the things you learn in a well-written book. Washington was never overly emotional, had unwavering determination and exercised granite self-control, particularly in public. His courage in battle was at times reckless.

Cedar Creek is moving swiftly this morning, spilling over rocks and gurgling as it passes on the other side of a stone wall. Nearly every surge forward in Washington’s life was linked to deep loss, usually the death of a loved one, his father, his older brother, his beloved step-daughter Patsy who died in her teens of an epileptic seizure.

Washington was not the flat cutout textbooks convey; he was complicated and occasionally deeply conflicted. He led the charge for freedom, but owned slaves. He was a walking contradiction, a man of considerable virtue willingly turning a blind eye to unconscionable coercion.

Saint and sinner all in the same package. The everlasting curse of humanity.

Along with others of his time, Washington committed to a crazy idea that had been tried only briefly in history. It was a vision for a nation not ruled by a single leader, a monarchy, a dynasty, or a chosen tribe, but by the people themselves. It would be a government of self-rule conceived in liberty.

The path takes a gentle turn. Around the bend, benches are lined in neat rows facing the Natural Bridge. You can sit and contemplate this magnificent wonder that soars gracefully framing a patch of sky. 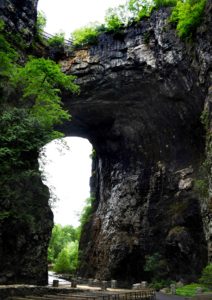 Wild notions of freedom, liberty and self-governance would have had plenty of room to grow here. Boundless skies, the rush of water, the strength of the rocks and forests without end.

You can imagine the silhouette of a man of considerable height and strength launching a rock over the arch. It’s entirely believable.

What’s hard to believe is that fledging bands of poorly equipped farmers, craftsmen and merchants, freed African Americans and even some still enslaved, waged battle for self-government, freedom and liberty against the world’s greatest military and somehow won.

The vision is ours to keep and preserve now. Long live wild ideas of freedom and liberty.