We have returned home from a short trip to Savannah, Georgia, and would like to confess.

We booked a vacation apartment in a building more than 100 years old in the historic district. It had 12-foot ceilings, 9-foot deep windows with louvered shutters, and a balcony with a ceiling fan, and was bordered by huge magnolias. It was like stepping into my cache of Southern Living magazines stashed behind a chair in our front room. 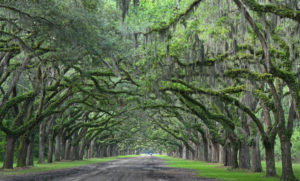 Southern Living and I became one, if only for three days.

There was so much to take in—magnificent architecture, beautiful landscaping, live oaks, Spanish moss, historic monuments and grand mansions. I may have been overly excited, which causes me to move faster than normal, which is already fast. The husband runs nearly every day, which means fast is his default mode as well.

On Day One we took a two-hour self-guided walking tour and finished it in 45 minutes. 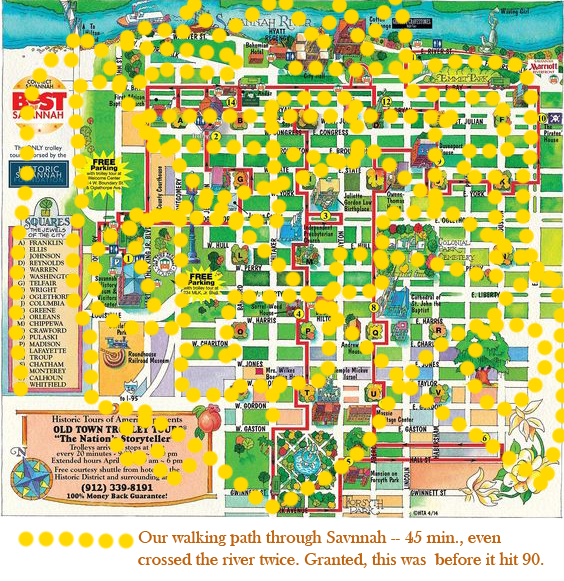 We bought a three-day parking pass that enabled us to park at any meter or in any parking garage, but never moved the car. Why drive when you walk fast?

On Day Two I sped read four plaques surrounding a historic mansion and began chit-chatting with other tourists about the history of the construction. Two blocks later we discovered they were trotting along behind us under the mistaken notion that I was a tour guide.

On Day Three we suddenly became aware that we were walking at quite a clip as we routinely outpaced horse-drawn trolleys and kept up with pedicabs.

We made a conscious effort to slow down as we started through another historic square. We even attempted to mosey. One does not walk in a straight line when moseying. One traces an elongated S, slowly weaving from side to side.

We failed at moseying, just like we failed at ambling and sauntering.

Northerners were not built for slow, easy strides, but for quick and jerky movements. We have been conditioned for speed by frigid cold, biting winds, large cities filled with heavy traffic, high-speed trains, and buses so long they have accordion middles so they can round corners. We move fast to survive.

If we couldn’t walk slow, maybe we could sit. We took a bench. For two minutes.

We decided if we were going to slow our pace, we should split up so we didn’t miss anything. The husband bolted for pictures of the house where “Forrest Gump” was filmed and I began photographing tables with white linens and centerpieces being set up for a special event near the famous cast-iron fountain at Forsyth Park. 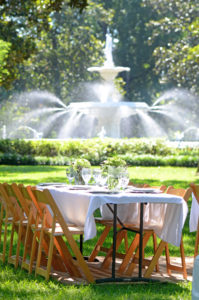 It was a splendid trip. We are at home now, craving Leopold’s ice cream, cheese straws from The Olde Pink House and green beans cooked with bacon. Had we stayed one day longer we both may have converted to sweet tea.

It was nothing but excitement and the desire to take it all in that caused us to move with such impolite speed.

We do hope y’all understand.