The husband came across the program from my father-in-law’s high school graduation, 90 years ago. It was the Class of 1928 and their class motto was “Build for Character, Not for Fame.” 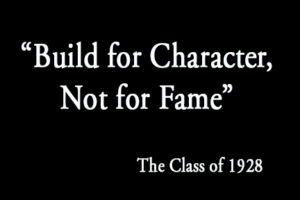 I’m pretty sure we’ve done a full reverse on that one.

We put an exceedingly high premium on fame these days. To paraphrase the late historian Daniel Boorstin, we have people who are famous for simply being famous. They haven’t done anything particularly noteworthy, but they do take marvelous selfies.

A friend who pastors a church in the inner-city described a street brawl in front of his family’s home one evening. It was a group of mostly women, some with children in tow. The police said it would be a little while before they could get there, so in the meantime, our friend began taking a video. Usually when a mob sees someone pull out a cell phone, they disburse because they know they can be identified. Not this time. This time a brawler momentarily broke from the mob and asked our friend if he’d send him the video.

The man confused fame with infamy. It is often a fine line between the two.

“Build for Character, Not for Fame,” is based on the assumption that one is looking up and ahead. That’s an encouraging thought, especially today, when most of us have our heads down, crooked over screens. Looking ahead and building for character takes thought and intentionality.

One can be intentional in building for fame as well, but the components of fame are often circumstantial. Fame relies heavily on the right timing, right externals, right connections and cultivating a base of fans and supporters.

Character is rarely circumstantial and not subject to the whims of others. Character is built with self-discipline, a willingness to learn from difficulties and humility. Character grows internally and needs no applause.

Fame depends on people looking. Character is who you are when no one is looking.

Fame is often laced with an inherent jealousy, a constant, low-grade anxiety that the clock is ticking, fear that someone better able to please the crowd is closing in from behind.

Character is marked by contentment and generosity. There is satisfaction that comes with the reward of accomplishment, but at the same time good character willingly holds the door for others also hoping to achieve.

This commencement season, speakers will tell new graduates to get out there and build a better world.

Build for character and you will build a better world.