I am missing wit today. Not mine—that train left the station long ago—but the wit of others. I miss hearing friendly banter, lively repartee and the clever twist of a phrase.

There is a growing brevity to our conversations today. They tend to be condensed. Telegraphic. We’re all in a hurry multi-tasking. It’s not easy doing six things at once and none of them well. 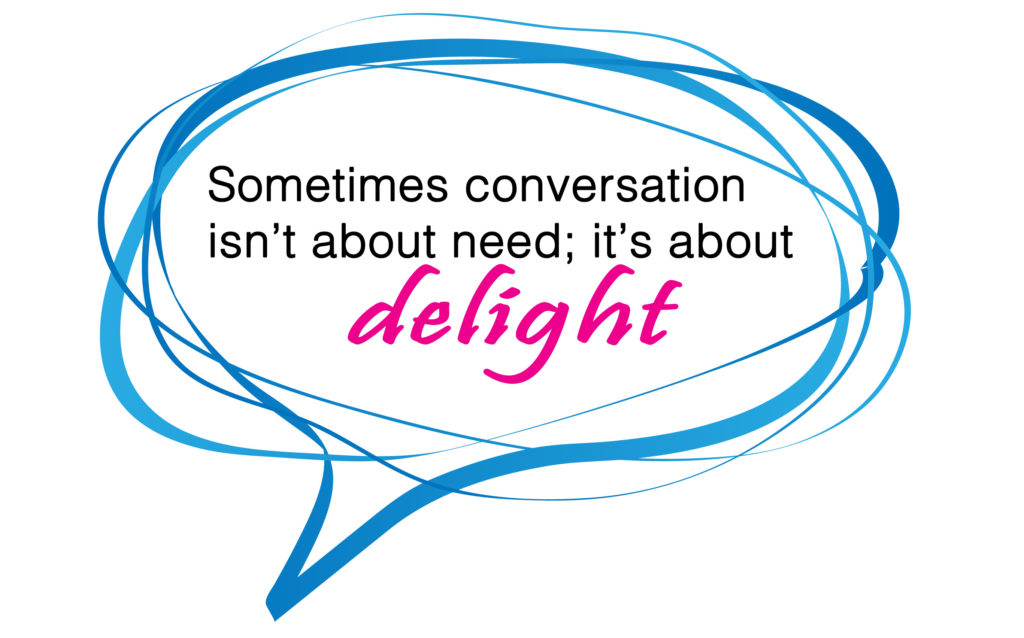 It’s nearly an imposition to ask for someone’s time and presence. Plus, who needs a face-to-face when you’ve probably already covered the nuts and bolts of what you needed to say in an email, Facebook message or text. Or an emoji. Or a combination thereof.

“Happy Anniversary. I (heart) you.”

But conversation isn’t always about need; sometimes it’s about delight.

As we were led to our seats at a restaurant, we passed an alcove with low lights, beautiful décor and four different couples seated at tables for two. Three of the four couples were radiant—basking in the glow of their cell phones.

The fourth couple weren’t on electronic devices but looked as dull and glazed over as the couples on their cells. Maybe they were lamenting having left their phones at home.

I’ve never understood why people make plans with other people, clean up, drive to a mutually-agreed-upon place and then ignore present company while they interact with others in cyberspace?

There was a day a woman would have walked out on a man for asking her to dinner, then spending the evening ignoring her and talking to someone else.

I was at a deli where a 2-year-old was on her mother’s cell phone while the mother and grandmother ate and talked. Occasionally the child would grunt, thrust the phone at her mother and the mother would retrieve the desired screen for the child. When it was time to leave, the tot screeched and screamed, refusing to relinquish the phone. The mother pleaded and cajoled, then pulled out the big guns: “Give me that phone or you can’t watch cartoons when we get home!”

Does anyone ever talk to the child? Or does the child simply move from one screen to another all day? In some corners, even conversing with one’s child has gone from a pleasure to a duty.

I grew up in a family of talkers, as did the husband. Both sets of parents often had friends over for the evening, to have dinner, play cards or simply sit outside on a warm night with a cool drink and talk. They talked and laughed, and teased and talked, and talked some more, voices drifting down the hallway or through open windows hours after we’d been sent to bed for the night.

I’d lie awake listening, thinking what grown-up fun that must be to talk and laugh with your friends long after dark. I thought to myself, I’ll do that someday.”

We do. But not as often as we once did.