When we gave my mother a grandma necklace years ago, we never dreamed a woman could get so much mileage out of a simple gold chain with five little figurines. 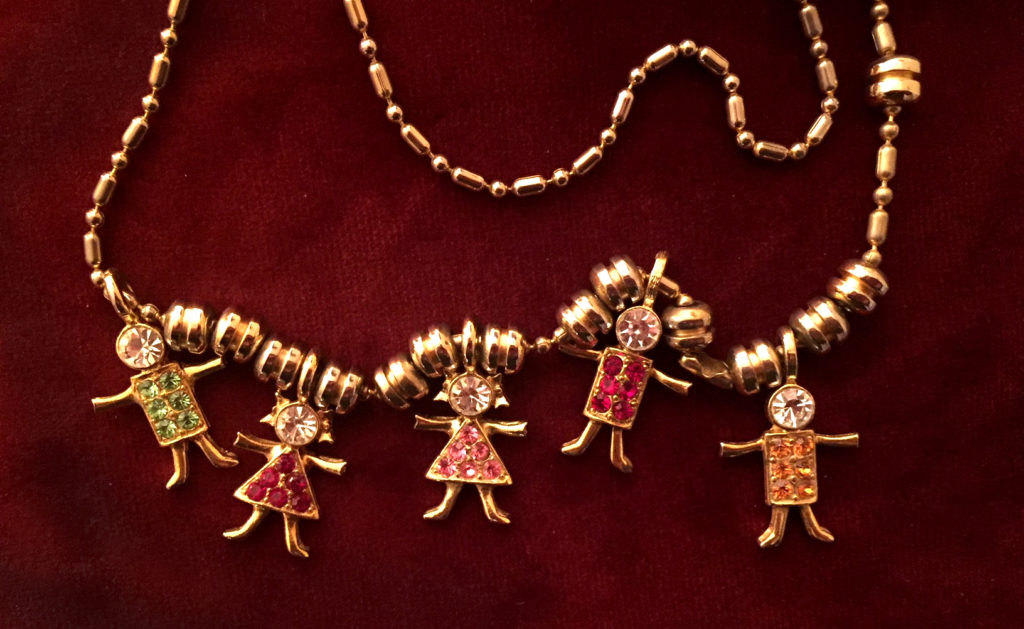 “I see one of the grandkids is missing, Mom. What happened?”

“Your brother’s youngest smarted off. I took him off the chain until he straightens out.”

If one of the grandkids got cheeky with her, she took them off the necklace. She didn’t really take them off, but she would fling their figurine around to the back of the chain. Swinging in style one minute, gone from glory the next.

She told whichever kids had been acting up that they could come back to the front of the necklace and join the others when they straightened out. She was a matriarch who knew how to hold a crowd.

Her antics with the grandma necklace were second only to the Great Pillow Caper. Mom and Dad, completely devoid of all rationality, once rented a huge van to take 11 of us a fair distance to a family reunion. It was a tight fit, elbows in one another’s rib cages, window space at a premium, crying babies and cranky kids. Squabbles mounted on the long drive home. A dispute ensued between a couple of the kids over a pillow.

Grandma demanded the pillow be passed up front to her and announced she would “dispose” of the matter once and for all. She lowered her window. Then raised it; then lowered it.

The kids were spellbound.

Kids nothing —we all were.

Someone yelled, “Do it, Grandma! Show ‘em what you’re made of!”

Of course, she wouldn’t really throw a pillow out of a vehicle window, which would be both illegal and hazardous, but it did keep the kids at rapt attention with the possibility that she might.

The fighting stopped immediately. Those children, now all adults, are exceptionally well-behaved on long car-trips but have an aversion to traveling with pillows.

Being that the grandma baton has been passed to the next generation, it only seemed fitting that I, too, have a means of holding a crowd. I, too, have a grandma necklace.

There are nine little figurines on the chain. The grands know that I love wearing it and love keeping them close to my heart. They also know that jumping out of closets in order to hear me scream, or commenting about the wrinkles around my eyes will get them removed from the necklace.

Periodically, chaos erupts when we are all together and an instigator will run over, check the necklace to make sure he or she is still in place, then take off yelling, “I’m still on the necklace!”