On our last extended family vacation, we decided to drop the better portion of our retirement savings on tickets to one of those venues where you sit around the edge of an arena and watch live family entertainment while eating a four-course meal with your hands.

Our middle name is classy.

Before the show, we were herded into a lobby where there was live music and, in case we thought we didn’t pay enough for the tickets to the show, we could drop a few more bills on pricey soft drinks that came in plastic boots. The idea of drinking out of footwear was not all that novel to our group, as several of the younger children had been gumming their shoes on the 8-hour car ride down.

Once we took our seats around the arena, a very friendly wait staff appeared and started delivering food faster than a Vegas blackjack dealer deals cards.

There was soup, biscuits the size of Frisbees, a full rotisserie chicken for each of us, hot buttered corn, buttered potatoes—food was flying. And napkins. Lots of napkins because, like I said, you eat with your hands.

The preschool kids, who for years have been instructed not to eat with their hands, were hesitant to dive in. They thought it was set up. I kept saying, “No, no, it’s OK. Just tear off that chicken leg and eat it. Look at your daddy eat with his hands. Look at your mommy eating with her hands.
“I know your hands are greasy, but don’t wipe them on my — ”

People were wiping hands on napkins, sleeves, pant legs and licking butter off their fingers, but nobody was complaining because you don’t complain when you pay big bucks to do without silverware.

If it’s true that “everything is betta with butta” we were having the time of our lives.

And then they introduced the fire. A huge flame soared from the floor of the middle of the arena. Some of the little ones jumped and a couple of them screamed. I jumped and screamed. You could feel the heat from the flame and I wasn’t sure but what both of my eyebrows had been singed. 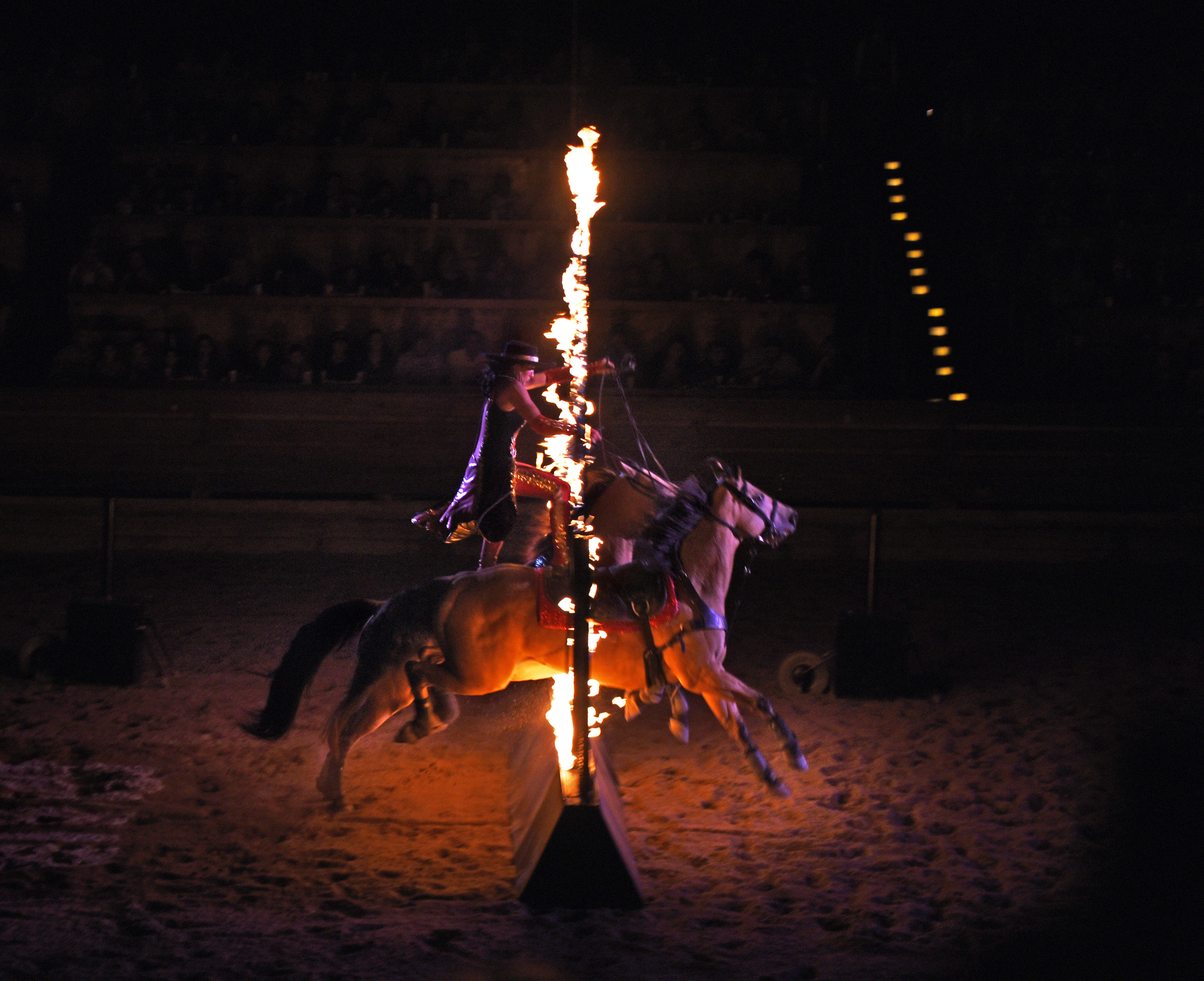 When the trick riders came out on horseback and began jumping through rings of fire, a couple of the kids went over the edge.

“Where’d your youngest go?” I asked my daughter.

“Under the table,” she said.

I looked under the table and sure enough, she was hanging onto her momma’s legs for dear life, sobbing her eyes out.

Next thing I knew another kid jumped on my lap and was shaking like a leaf. She tried to bury her head against mine but her cheek kept sliding off my cheek because we both had butter on our faces.

The little one under the table didn’t come out until the show was nearly over and the last horse had left the arena. But the next day, as we hiked trails and enjoyed the mountain views, they jabbered about the trick riders, the disappearing cowgirls and the beautiful ladies that floated down from the ceiling in big beautiful gowns.

That’s how it often is with a vacation—you don’t realize how good it was until after it’s over.