Concerned the grands don’t get enough exposure to wildlife, I announce we would be looking for armadillos on a recent road trip.

“Keep your eyes peeled,” I say. “Armadillos have come up from the southwest and are frequent visitors here.”

“Well, an armadillo is the size of a small dog with short legs, has a pointy nose and a shell over its body like a turtle.” 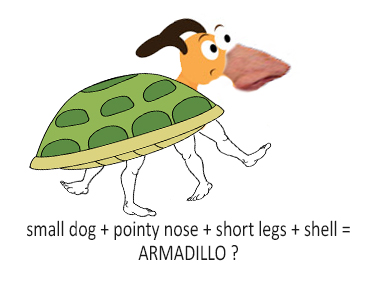 They look at me like I am out of my mind.

“Seriously—and the shell has ridges on it and little itty bitty bumps.”

I might as well have said that I was going to grow a third ear.

“No, not today it wasn’t.” (And not tomorrow or the next day either.)

“There’s another! And another!”

“Why are they all on their backs, Grandma?”

Each and every armadillo has been incapacitated. I search armadillos on my phone and see that they are also called “hillbilly speedbumps.” Great. I’ve been encouraging the grands to scout roadkill. Maybe seeing a few pictures of armadillos upright will provide a distraction. “Look, I have a picture of an armadillo on my phone,” I say.

“Let me see,” one says. She enlarges the photo and screams, “What’s that hair under its chin? Ooooh gross! Take it away!”

I used to believe a baby bat was the ugliest creature in the world—a face only a mother could love. Armadillos with bad chin hair outrank them.

“Look, girls, it says there is a pink fairy armadillo. Let’s have a look.”

Picture a baby bunny with long curled toenails in dire need of a pedicure. Add a slab of raw pork ribs to its back and you have a pink fairy armadillo.

Aren’t we all? I’m about to divert attention to a word game when the husband exclaims, “I just saw a bald eagle.”

Silence. The skepticism that was once malleable has now hardened.

The next morning, we’re cutting through a large city, cruising along four lanes of interstate with heavy traffic, when I spot a wild turkey emerge from underbrush and begin strutting on the shoulder of the road.

My claim is met with palpable doubt.

One of the grands takes pity and whispers, “It’s OK, Grandma, I believe you. I believe Grandpa, too. Did you know I saw an animal?”

“A penguin. It was back under those trees.”