Can someone please tell me why mothers hang onto their children’s old report cards?

I have a three-ring notebook full of report cards and standardized test scores squeezed in among my cookbooks. Every time I shuffle the cookbooks, I consider pitching the notebook. But I never do.

What am I waiting for? Do I really think our youngest daughter, now married and a mother of two, is going to take another run at an A in high school chemistry? Do I think our thirty-something son will somehow pull up that third-quarter D he got in sixth-grade music because he refused to memorize the school song?

To make the situation even more bizarre, some of the report cards are nearly meaningless. All three of our kids started school at a progressive elementary that only gave grades of C, S and N—commendable, satisfactory and needs improvement. 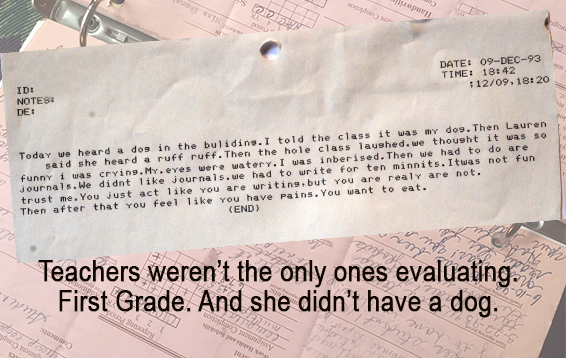 On the bright side, the kids all received a lot of participation ribbons. I saved some of those, too—just to see the kids roll their eyes.

I’m not alone with my dusty collection of report cards. My mother saved every report card my brother and I brought home. She kept them in a closet in the basement along with the adult beverages. If you knew my brother, you’d think there may have been a reason my mother kept them there.

After my brother took a standardized test in second grade, the teacher called my parents for a meeting. She said in all her years of teaching she’d never seen a student miss every question. She suspected, because he was both bright and playful, that he did it on purpose. He pleaded the fifth.

Report cards and test scores aren’t the only things mothers save. I was part of a conversation recently in which women discussed saving baby teeth. One woman gagged at the mention; two others confessed to keeping the first tooth each child lost.

Why? It’s not like you could ever use one for chewing. Of course, the right kind of kid could have a lot of fun with a spare tooth at a family meal.

Other mothers save hair from first haircuts. Are they going to have a wig made?

What’s with our attachment to all this old useless stuff taking up space? Maybe without those old report cards I would have forgotten about that ridiculous grading system.

I might also have forgotten when our son finally decided to begin applying himself. That’s ridiculous. I’ll always remember. April. It was a Tuesday, 1:37 p.m. Partly cloudy. The sky opened and birds began singing. Some things a mother never forgets.

But maybe I truly would have forgotten the name and face of the teacher who wrote, “I’m praying for you,” on our oldest daughter’s report card when she missed school for frequent appointments at a children’s hospital.

Maybe the real reason we hang on to all this stuff is to remind ourselves of all the miles we’ve come—and how quickly the miles pass.