When our oldest daughter and her husband were expecting their third, he wanted to know the gender and she didn’t. Despite all our attempts to get him to crack, he never did. You could trust the man with your social, your PINs, computer password and true weight.

We have one in the family whose vault door might as well be double-hinged. Try as she might, she can’t keep a secret. 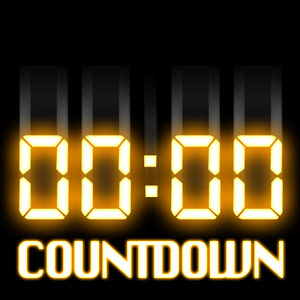 “I know it’s going to be your birthday, Grandma,” she says with an impish grin. “How old are you going to be?”

“Whoa,” she says, drawing the word out for maximum impact.

The funny thing is, I look in the mirror a lot of mornings and say the same thing myself.

“Mom said she would take me shopping because I wanted to buy you a present myself and I did.”

And with that, the countdown begins. It is just a matter of time before she spills the beans. Ten, nine, eight . . .  every fiber of her being is about to explode.

“Mom took me to Stein Mart. We had a coupon!” Seven, six, five . . . she squeals and jumps out of her chair with excitement. The kid may not be able to keep a secret, but at least she is learning you never pay full retail.

“You like turquoise. I know you do.” She is hopping from foot to foot, twirling in circles, her squeaky little voice rising higher. Four, three, two . . .

“You don’t want to know if I got you a necklace?” 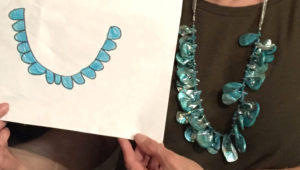 She sits down and begins to draw. She draws a semicircle with turquoise shapes bordering it on one side and then, beaming from ear to ear, holds the drawing up to her chest.

When her mom picked her up, she immediately admitted to telling the secret. She said she had spilled the beans—that her stomach had hurt because the beans needed to come out. Isn’t that how it always happens? It’s not your fault, it’s the beans’ fault.

On my birthday I unwrapped tissue paper in a gift bag and pulled out a lovely turquoise necklace strikingly similar to a drawing I’d seen the day before.

The kid may never have a career in espionage, but she definitely has a future in art.