It’s PSL season. You know what that is, right? Pumpkin spice latte. It’s not just a drink, it is the official kickoff for fall—the ref’s whistle signaling that it’s time to break out the sweaters, boots, cider, pumpkins, candy corn and endless adorable crafts.

Not wanting to miss out, I tried a pumpkin spice latte. I drank what I could, dumped the rest of it down the sink and stood there wishing I had my money back.

PSL did not kick off fall for me. It only made me revert to my original thought on pumpkin—that it is a bland vegetable made tolerable only by being in a pie.

The same women sipping PSLs and savoring the arrival of fall are flocking to Pinterest in search of adorable crafts. Our youngest daughter has already made a wooden sign with arrows pointing different directions that say bonfire, apple cider, hay rides. She’s clever, crafty and decisive like a good crafter should be.

My last Pinterest project (make that Pinterest fail) involved thousands of small red beads, a hot glue gun and a wooden cutout. The end product was supposed to be a festive Christmas decoration to hang on your door. Mine turned out looking like a giant red N. Having been born in Nebraska, every time I walked by it I yelled, “Go Huskers!”

Besides, the husband asked if it was really necessary for me to craft. He claims his nerves can’t take the sudden outbursts and shrieking. I tend to be careless with the hot glue gun.

PSL and crafting may be out by a process of elimination, but there’s always outdoor decor. I see friends on Facebook talking about spending entire afternoons putting up fall décor.

I was thinking maybe décor was my call, when I heard about Mum Mania on my favorite Saturday morning home and garden show broadcast from a local hardware store—big mums at low prices. “Come on down,” they said. So I went on down.

I was feeling confident about my outdoor seasonal décor potential. Maybe Mum Mania was where I would excel. 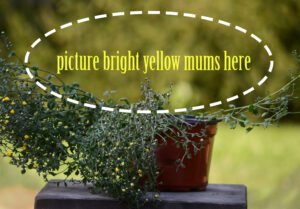 I purchased four incredibly big mums for an incredibly good price. After dropping three off for other people, I took the last one home and stuck it in a pot.

The wind blew it over in the night. The big clay pot cracked and broke into pieces and so did the mum. I kept pieces of the broken mum to remind myself that outdoor décor can burn you faster than a hot glue gun.

My last chance for savoring the arrival of clear days and crisp nights was fall fashion. Then I discovered women are wearing one-size-fits-all plaid wool ponchos. A large plaid poncho on a height-challenged person such as myself looks like I barreled through a horse blanket head first and took the blanket with me. Whenever I try to pull that look off, people stop and ask, “How’s the horse?”

Fall used to be my favorite season.

I’m not sure how much longer the two of us can fit into this wicker chair together, but for now we fit just fine—snug, but fine. She’s a willowy thing, long legs, hair flying in her face, serious one minute, pure goofball the next. We are on the porch leafing through the Sibley Backyard Birding cards.

“Did you know a swift can sleep when it flies?” she says. 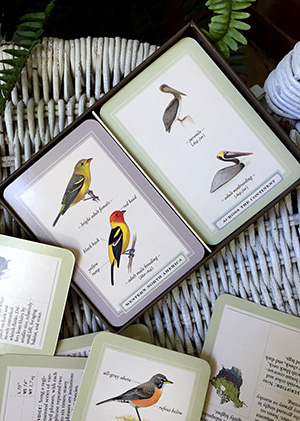 Amazing is that she looked a whole lot like a baby bird herself when she was born, just over 3 pounds. Now here she is sitting strong and healthy, neurons firing, feet swinging, talking about birds, bicycles without training wheels and cartwheels.

“Look at this one, Grandma. We’ve seen this one.”

“Looks like that blue jay slicked his hair back with mousse, doesn’t it?”

“Listen,” she whispers. “A woodpecker. Do you hear?”

Oh, I hear. I heard when she cried nearly nonstop the first six months of life, when she babbled first words and now as she chatters nonstop about her new shoes, trips to the library and how she’s stuffy from allergies.

A robin swoops over to the crabapple tree and perches on a branch.

“Look up his song, Grandma.”

“He’s talking to your phone!” she squeals.

“Phone call for Mr. Robin on line one, please.”

She is beyond delighted and I am delighted that she is delighted, knowing that these moments will pass us both by all too quickly.

The robin swoops down to the lawn. She watches him intently, wondering what he might find and speculating that he probably has a nest nearby. The robin hops around, pecks a couple of times and pulls out a fat, juicy worm. He tilts his head as if to show us his catch. And then he takes off.

We have a long-standing family tradition of thinking someone may be trying to harm us in the kitchen. It’s not that we’re paranoid, it’s just that we all think somebody is out to get us.

When my brother was 4, he watched our mom make hot cocoa at the stove. He studied her mixing milk, sugar and cocoa in a pan over a flame. When she poured in a splash of vanilla, he asked if she was trying to poison him.

There was no convincing him. He’d seen what he’d seen.

Because such suspicion is deeply embedded in a family’s DNA, years ago when one of our girls watched me make guacamole and saw me add lemon juice, she asked me what I was up to. As though I was doing something devious.

“It keeps it from turning brown,” I explained.

She actually made me feel criminal making guacamole.

Family stayed with us over the weekend and I made scrambled eggs Saturday morning, sprinkling them with kosher salt and freshly ground pepper. Later, the 7-year-old took me aside and said, “Grandma, I liked pepper on the eggs. It makes them spicy.”

“But we don’t eat salt.” She tilted her head and shot me a look that said, “What do you have to say for yourself, woman?”

Guilty—that’s what I have to say for myself. Guilty of seasoning eggs.

Not only is our family suspicious, we do our best to spread suspicion to incoming family members.

We have a son-in-law who detests tomatoes. He so detests them it even says so on the back of his driver’s license: Designated Organ Donor and Hater of Tomatoes.

I persuaded him there was nothing as wonderful as a sun-dried tomato packed in olive oil. So he tried one. Cautiously. He chewed it a couple times, looked at me like I was trying to kill him and then spit it out.

There’s been a distance between us ever since.

We were at our son’s place in Chicago a while back and I was stunned to see him hunched over a bottle of vodka at the kitchen sink on a Sunday morning.

“Is everything all right?” I asked.

He said yes, he and his wife have been making their own vanilla by steeping vanilla beans in alcohol for two to three months and he was just straining some for a specialty coffee.

He gave me a bottle to bring home.

I was straining some vanilla from the big vodka bottle into the little bottle I keep in the spice cabinet when the husband walked in.

It is simply understood that you don’t visit my hometown of Kansas City and leave there without some of the city’s famous barbecue sauces—Jack Stack, Gates, Blues Hog, Rufus Teague and Smokin’ Guns—which is why when everybody else was semi-conscious from back-to-back feasts of smoked brisket, pulled pork and burnt ends, I announced I was going to the grocery.

“Do you know how to get there?”

I said sure, but I wasn’t really. My brother’s place is outside of the city along back roads of chip and seal, stretches of asphalt here and there and winding highways like Y that slide into other winding highways named YY. And no, you don’t call it Y-Y, you call it double Y.

My nephew announces that he would like to go along. My nephew can’t see. He wore glasses and contacts for a time to enhance what sight remained, then sight left him completely. He mostly keeps his eyes closed now. It’s probably been a decade since he has seen vague outlines of forms.

“Do you really know how to get there, Aunt Lori?” he asks, buckling his seatbelt.

He chuckles. “Hang a right out of the driveway.”

Everything in the country wears thick layers of gray dust courtesy of the clouds cars and trucks kick up as they barrel down the road. But a noisy rain has passed through this afternoon. The land and vegetation, freshly showered, are so green and lush you suspect wet paint on everything in sight.

“We’ll pass some pipes up the road. After that turn right.”

“Pretty sky,” I say. “It looks like orange and lemon sherbet all swirled together.” 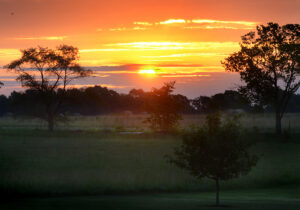 Around a curve and on a straightaway are a small herd of goats in a low-lying pasture.

He has a phenomenal memory and uncanny sense of place and direction.

We approach the edge of town and he asks if I see duplexes at the exact moment we drive by some. “One of my good friends used to live there,” he says. “Turn by the Quick Trip up ahead.”

“There’s a road before it and a road after it,” I say.

“Turn after, not before.”

We’re in the business center now. He names all the big box stores as we pass them, correctly and in sequence.

We leave the grocery with bottles of barbeque sauce jostling in plastic bags stretched thin.

“Want to take a different way home?” he asks with a grin.

“Go down to the end of the lot and turn right. When my friend Phillip and I take this road we can get from my house to the Arby’s parking lot in 10 minutes.” He laughs and slaps his leg.

The sun throws its last long rays of golden light across a field of wheat. The clouds and the sky are a mosaic of color so beautiful as to be distracting. It’s good to have a guide.