Since the people we most often dine with on the deck are grandchildren who go to bed at 7 p.m., we are rarely outside after dark and able to enjoy the ambience of flickering candles or string lights. Ambience with grandchildren consists of greenish night lights that automatically come on when the room gets dark.en. When friends who have been known to stay up until the wild hours of 10 and 11 joined us for a late dinner, I immediately wove 40 feet of tiny fairy lights through a tree that overhaangs thendeck. Ambience at last. 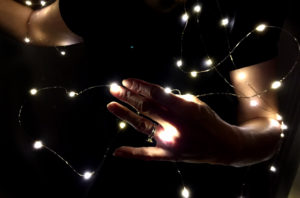 When the sun went down and the lights went on, the husband commented that none of the lights were in the top, or even in the middle, of the tree.

“Scoff all you want,” I replied. “I’m enjoying the ambience.”

So did our friends, who stayed until 10:30. We said goodbye on the front porch and I went back outside to retrieve the fairy lights, gently pulling them from the branches, draping them around my neck and across my arms, so they wouldn’t tangle. If it had been December, I could have stood in the front yard and doubled as a Christmas tree.

I walked back to the house and discovered the screen door was locked. I knocked softly. No answer. I knocked louder. Still no answer. “Anybody home?” I called, but not too loud, as it was now after 11.

Pacing the patio with tiny glowing lights draped over me, I realized if one of the neighbors looked outside they could report a UFO, and a helicopter with a blinding searchlight would be sweeping the backyard at any moment.

I cut the lights. It was pitch black.

I peered in the house again and saw the bathroom door was closed.

Being a cloudless night, I walked to the middle of the backyard to get a good look at the stars. Talk about ambience.

I walked back to the house. The bathroom door was open, but the husband was nowhere in sight.

I thought I heard a raccoon rustling in the bushes. Or a ‘possum. Probably both.

All of a sudden there was a glow casting on the lawn. It was from the light in our upstairs bedroom.

Great. The man was probably going to bed. When would he notice I wasn’t there? Midnight? Two a.m.? A week from now when he stumbled across chunks of my hair raccoons had ripped out and scattered beneath the grill?

I pressed my nose to the screen door again. Futile. Then I remembered that some of the grands had put a rip in it not long ago. Yep, I could reach through, tear it a little more and unhook the door.

I was standing in the kitchen, winding up the fairy lights, when the husband walked through and said, “Where have you been?”

“I was enjoying the ambience.”