Can we stop saying we’re sorry?

I’ve been on the phone trying to straighten out some billing matters and every customer service rep I talk to is sorry. Sorry is epidemic.

“How may I help you today?”

“We’ve had a continuing problem with our bill.”

“I used to be sorry, too, but now that our bill has been $45 in your favor for three months, and an additional unauthorized $13 charge is appearing, I’m past sorry.”

“You’re the fourth person I’ve talked to about this.”

“I talked to a woman named Melanie yesterday. She was sorry, too.”

“Why are you sorry? Do you know Melanie? Should I have refused to talk to her?”

“Could you quit saying you’re sorry?”

“I bet you’re going to tell me something different from all the other people I talked to, aren’t you? I get a different answer every time I call.”

“Could you agree not to say sorry one more time?”

“Thank you very much.”

“I know you didn’t write this convoluted bill, you just happened to pick up the phone today, but I don’t need you to be sorry—I need you to fix it!”

After 15 minutes, including several stints on hold, he did fix it. I thanked him for being of genuine assistance.

“If that’s all ma’am, I know you asked me not to say I was sorry again, but I would like to say—“ 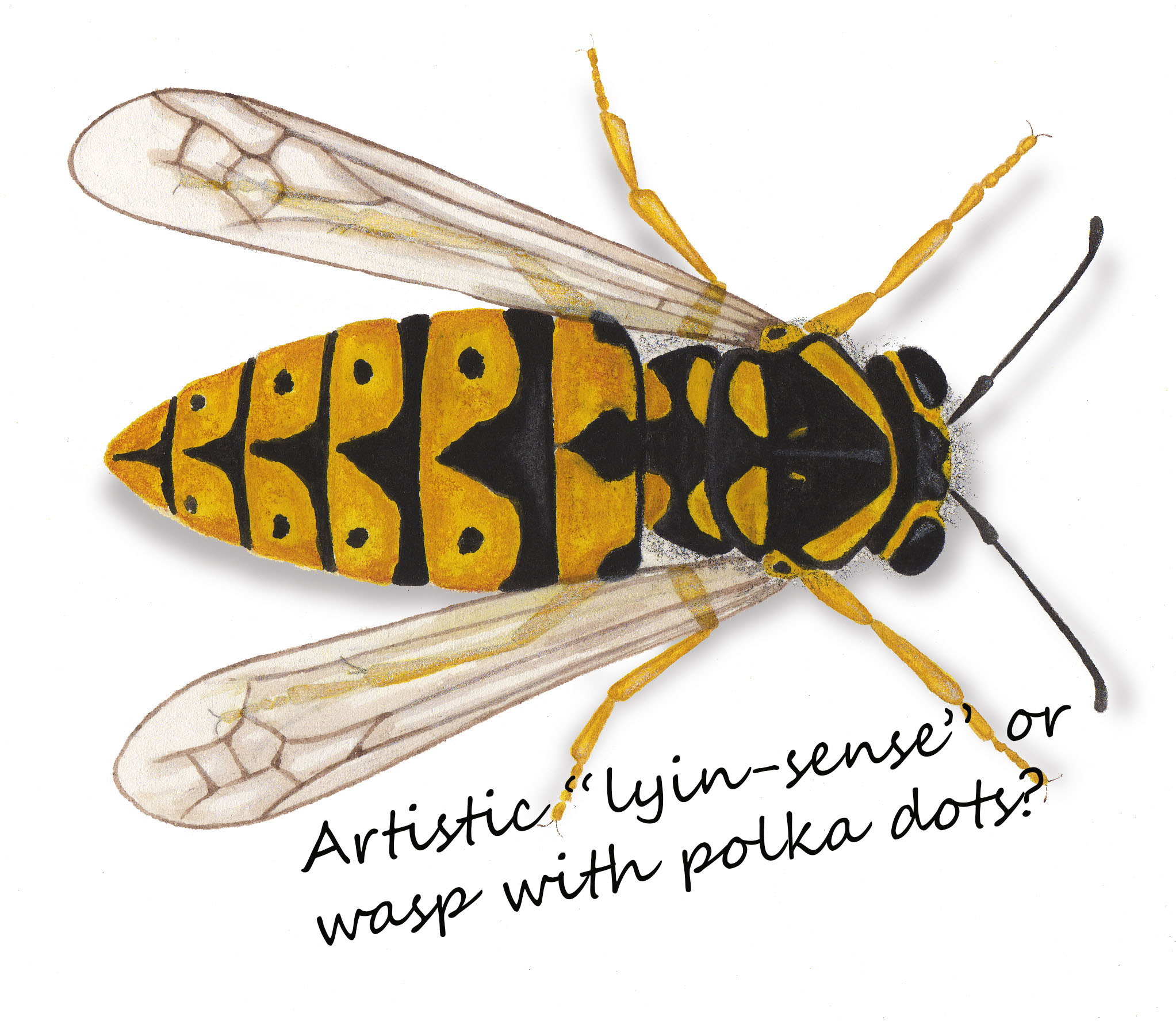 A few of the grands wanted to know if they could help write a column. I said, “It’s a lot harder than it looks.” I’m not positive, but I think two of them exchanged smirks.

They pointed out that they know their letters and can write upper case and lower. “You are qualified!” I said.

“What should we write about?”

“Sometimes your stories are about us. We could write a story about you. How about we tell how you killed the bee?”

“Wasp,” I said. “Accuracy is important.”

“Maybe,” I said, “but you can’t just say Grandma killed a bee. You have to set it up, like a real story.”

“Once on a hot sunny day I told Grandma I saw a very big bug flying in the birdhouse that’s on the playhouse.” 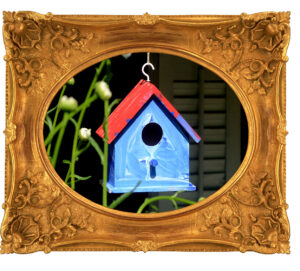 “Good, but you need to be descriptive. Paint a picture with words.”

“No, you’re writing a column. It’s easy to get distracted writing, but a good columnist hammers out 25 words before getting distracted with something like painting or going to the ‘fridge.”

“OK. It was a very big bug and it had polka dots and it was flying and I said Grandma do you know much about bugs and then you said I know some and I said good because I don’t know much.”

“Never mind. You can edit later. Or you can choose not to edit and give the editors something to do. Your story needs action.”

“That’s not so much true,” one says to the other.

“It is so. Didn’t it have polka dots, Grandma?”

“They weren’t exactly polka dots—but you could use your artistic license.” 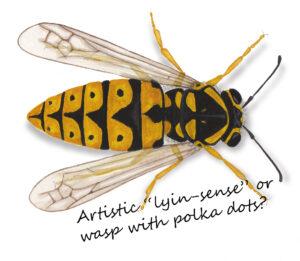 “Grandpa came with a can to spray the bees and Grandma said no that will make them mad and Grandpa sprayed them anyway and Grandma and Grandpa were yelling and bees were flying and Grandma killed some of them with a broom.”

“You were yelling. That is true.”

“You can’t end a column with anger. That’s what the rest of the news does. Leave the reader with a smile,” I said.

One of the five-year-old grands emerged from her bedroom the other night, stood in the hallway and announced, “I’m sweating bullets in here!”

It’s been that kind of kick-off to summer. There’s not much you can do about the heat (especially when you’re too short to reach the thermostat) except to go with the flow.

Naturally, the first rule of heat survival is to make no sudden moves, which would explain a recent get together.

There were 15 lawn chairs for adults and a half dozen or so chairs for little ones set in a circle under three large shade trees.

As is our custom, we talked and ate and talked some more and ate some more. The kids played, grew flush and downed juice boxes. Someone collected all the dirty paper plates. Someone else gave all the kids another spray of sunscreen.

Early afternoon melted into mid-afternoon and someone noted that they were now sitting in the sun.

“Sure does,” another confirmed.

It was quiet for a bit, then someone observed, “Suppose it will just keep moving.”

Everybody looked up at the tree canopy, then over to where the circle of shade was slowly relocating.

“Maybe we should move the circle.”

That suggestion was met with stone -cold silence. The last thing anybody wanted to do was pick up and move. Except for those in the sun, and they looked too hot and dehydrated to pick up chairs and move. That’s the power of summer heat – people who are ordinarily hard working and industrious are gradually reduced to shapeless mounds of immovable goo.

“Seems like a lot of work to move all the chairs,” somebody said.

“Why don’t we just move the chairs on that side since they’re the ones in the sun?”

The group pondered in silence. And sweat.

“That would change the circle into more of an oval, but it’s better than everyone moving.”

Although there seemed to be general agreement, there was still no movement.

“A lot cooler when that breeze was blowing.”

Somebody came out of the house and asked if anybody needed anything. I asked for a glass of ice water. I would have waited on myself, but I was holding a sleeping baby, which is akin to holding a hot water bottle, which gives one a permanent pass from moving in the heat.

When it is hot enough, just sitting can constitute a heavy workload. No doubt this is where the expression “go work on my tan” comes from. How do you work at getting scorched? You just lie real still.

They say it’s going to be a hot one this year. The summer forecast shows most of the country in a big red swatch marked “higher than average temperatures.”

We’ll have a lot of time to work on our sitting in the shade skills. 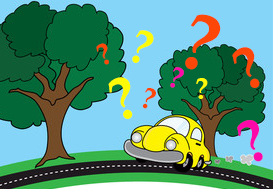 If you overlook the 6-year-old demonstrating her best soccer kick, whereupon her shoe flew off her foot and grazed the side of my head, we had a good visit with two of the grands.

When our son and his wife, who live in a two-bedroom apartment in Chicago, had their fourth child (family motto: “Stack ‘em high and stack ‘em deep”), we drove up, admired the new baby, and then brought the 6- and the 4-year-old home with us for 10 days. Make that 10 days and six hours, but who’s counting?

Occasionally on long drives, I sometimes grow drowsy, but this was not even a remote possibility with our inquisitive passengers in the car.

“Where does gasoline come from, Grandma?”

“What’s the difference between a golfer and a gopher, Grandpa?”

I would have said the difference between a golfer and a gopher is an “l” and a “p,” but their grandpa is more patient than their grandma.

“What exactly is quicksand?”

They had a steady barrage of questions that could have kept the Google search engine busy for hours.

“What if hail comes down on your house?”

It was like a game show with only seconds to answer before another question was fired.

“How do the police catch bad guys?”

“You’re good conversationalists,” I told the kids. “Do you know what that means?”

The good talkers came with, shall we say, an intensity.

“It’s going well,” I told a friend on day four. “Although it is a bit of a jolt to our systems.”

Two days later I considered instituting naptime. For the adults.

They were only small differences really. We gravitate toward conversational tones; the children were propelled by sudden bursts of shrieking and laughing. I’ve always like the piano on the west wall where it has stood for 20 years; they moved it perpendicular to the wall to create a fort.

“How is it going?” our son asked by phone.

“They’re angelic,” I said. (When they are sleeping.)

“Are they behaving?” he asked.

“Are they eating well?”

“Very well.” (If you count cheese as a food group.)

I was making calzones one afternoon when my garlic disappeared. I entertained the idea that I had finally lost my mind. Still, I looked high and low searching the kitchen and finally asked out loud how a woman loses six garlic bulbs in a mesh tube.

“Were they in that thing that looks like a sock?” one of them asked.

“I took it upstairs to play with it.”

It was wonderful to have them here for a lengthy stay. We feel like we completed a rigorous physical fitness training. Our reflexes have never been sharper, nor our response times quicker.

We called the day after we delivered them back home and asked how they had adjusted to one another again.

“It was sure quiet when they were gone,” our son said. “It’s great to have them back. It’s just a bit of a jolt.”