Much of our flatware has seen the inside of the garbage disposal, which is why a number of our spoons can now double as grapefruit spoons. Some of the forks, also roughed up by the disposal, have become too dangerous to use and some of the knives have simply disappeared. I suspect they went on camping trips and did not return.

Being that our numbers have grown, and that there are frequently large groups here for meals, I was considering buying additional flatware. Flatware is not an exciting purchase. It ranks up there with dentistry—not something you enjoy paying for, but necessity requires it.

Surprised to see the exact same pattern of flatware I already own on sale, I bought a service for four, hoping to pad out the existing rag-tag collection at home.

When I opened up the new set, the pattern was the same, but all the pieces were bigger. It was Tour de France flatware, forks and spoons on performance-enhancing drugs. The new teaspoons looked like soup spoons and the soup spoons looked like serving spoons. The new salad forks were nearly the size of the old dinner forks and the new dinner forks were large enough to roast small game over an open fire.

Everything is supersized these days. Not just flatware, but dishes as well.

Someone mentioned juice glasses the other day and every woman over 50 laughed. Once upon a time juice was served in small glasses (glasses that had previously held pimento cheese, been washed out and repurposed); today we drink juice in the 64-oz big gulp.

And then I look at my coffee cup. Who am I kidding? My over-sized coffee cup holds two cups of coffee. If I have two cups some mornings, I’ve really had four. And the husband wonders why I’m sometimes irritable?

A salad at one of my favorite delis recently came in a big bowl the shape and size of those cones that dogs wear after surgery. Each time I leaned in for a bite, I couldn’t help but wonder how my sutures were doing.

Food itself has grown larger these days as well. A typical bagel is three servings of bread. “I’ll have a half a pound of cream cheese to go with that, please.” If muffins grow any larger they’ll need to be rolled out on dollies.

All of this is not without consequence. There is speculation that in addition to having height charts, we may soon need to keep width charts.

Even the tables we eat at and the chairs we sit in are larger—the Jack and the Beanstalk line of furniture. Our houses have grown larger, too. Note the high vaulted ceilings. Lovely. But who breathes up there? Nobody. Which is why you have to buy a large fan to force down large masses of heated air to warm the people sitting in the large chairs at the large table eating large portions off large plates with large flatware.

Is this what they meant by living large?

The humble shopping list has finally been venerated to its rightful place in history. Archaeologists have discovered mundane lists written on shards of pottery dating back to 600 B.C. The lists may give new insight as to when books of the Old Testament were written, ancient literacy levels and, most importantly, what people were picking up on the way home from work. 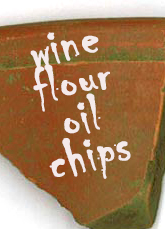 Is there anything as revealing as a shopping list? One of the ancient lists includes “wine, flour and oil.” This tells us that people centuries ago were drinking heavily, consuming carbs and fueling high cholesterol, which answers the question, “What would you do without the internet?”

It is a wonderful affirmation of humanity to learn that people have been making shopping lists for centuries. I, for one, always make a list before going to the store. Sometimes I even remember to take the list with me.

No doubt it would be harder to forget the list if it were written on pottery shards able to pierce my clothing or handbag and leave deep puncture wounds in my flesh. Perhaps those B.C. shoppers were onto something.

Often I leave the list on the counter, lose it in my purse or forget it in the car. I will find a crumpled list a month later and read it out of curiosity, only to discover that we are dreadful creatures of habit needing the same old wine, flour and oil again and again.

It appears the ancients had the same things on their lists over and over as well. One list called for “three baths of wine” and another for a “full homer of wine.” The lists appeared to be for items meant for delivery to a Greek mercenary outpost—their strategy being if they could keep them supplied with libations, they could keep them fighting. But hopefully not among themselves.

The most fun I ever had unearthing an ancient shopping list was when I put on a coat I hadn’t worn in several years and found a list in the pocket along with a twenty dollar bill. It was such an exhilarating discovery that sometimes I put on every coat in the hall closet hoping for a repeat discovery. Sometimes I even put on other people’s coats.

The ancient shopping lists recently unearthed appear to be written by men for men. I would venture to say that today it is women who most often write shopping lists for men. Few things are more dangerous than writing a short list for a hungry man. Write a shopping list for two dozen eggs and a hungry man will come home with two full grocery bags, both of which will be filled with nothing but tortilla chips, all things ranch and Sriracha. Lists were made to be broken.

This recent discovery is heartening on yet another front to those of us making the same old lists and often losing them. We are creating work for archaeologists of the future.

“Milk, lettuce and chicken breasts.” Wonder what they’ll make of it?

There is no better way to stir a crowd than by asking whether they prefer reading books in print or books on a screen.

Lovers of paper will hold their noses high and claim there is nothing quite like holding a book in hand. You can highlight, underline, make notes in the margins and remember whether something you want to find later was on the left or the right.

Lovers of screens will hold their noses even higher and counter that they can make notations on downloads as well, and perform search and find functions.

Lovers of paper will then pull out the heavy guns and say, “Ah, but you can’t enjoy the smell of a book on a screen.”

Lovers of books will say, “I thought you looked heavier.”

Lovers of books will question whether the lovers of screens value quantity over quality. At this point, you, having successfully stirred a heated debate, should excuse yourself to the appetizer table.

Personally, I am firmly in the camp that straddles the fence. I do the majority of reading online, but have a fondness for words on paper in my hand.

On my bedside table is a stack of theologians, philosophers, humorists and essayists—Audubon, Toqueville, Thurber and Twain. On the husband’s side of the bed there is no table. His stack builds from the floor up, books about photographers, artists, painters, the history of wars and the history of historians. I’ve said when his pile passes the height of the chair rail, he must thin the stack.

The man would sooner raise the chair rail than thin the stack.

Our grown children came of age with the digital revolution and the dawn of social media, yet they all prefer books in print. A Pew study recently found that the highest print readership rates are among those ages 18 to 29.

Of course, another study disputed the Pew study and said readers ages 18 to 29 just think they like books in print, but actually prefer reading in digital form.

At this conflicting juncture, the only thing for any of us to do is print out the study we find most disagreeable and then tear it up. It won’t change anything, but it is wildly satisfying to hear the sound of paper ripping.

The best selling point for traditional books is that they are cordless—the one thing we never need plug in at night. A book doesn’t go off, beep, chime or make noises of any sort.

A book is a quiet comfort. A book in hand becomes an extension of you, speaks to you, lulls you and quiets you. It slowly leaves your hands, nestles in the bed or tumbles the floor.

I rest my case. And my book.

We officially became cord cutters—people who cut their cable television service. There are two types of cord cutters: those who are young and cool and hip and would rather livestream everything and those who are looking to save a buck.

Go ahead, guess which category we fall into.

I’m not saying the cost of cable is high, but we figure that with the savings we can take a nice three-day weekend trip somewhere. Or fund our retirement.

The truth is, our most recent cable service never worked. The television constantly froze and dropped the signal. It took the cable provider only a year and a half, three different modems and five line techs to our house to determine that the company never should have sold us cable, as we are 600 feet beyond their service range. In the future, we’ll be considering tv internet packages instead of straight-up cable, that way we at least know what we can get ahead of time.

Being fairly easy going, we grew used to the cable signal intermittently dropping. It gave us time to do other things, like tidy up the kitchen, put in a small vegetable garden and read “War and Peace.” But the final straw was when the cable went out during the finale of Downton Abbey. We were left hanging. We’ll never know if Lady Mary was ever finally able to dress herself.

The only other itsy bitsy drawback to being cord cutters is that we may be getting a visit from Homeland Security. I wanted to watch the presidential candidates debate the other night (a glutton for punishment) and I found someone livestreaming them on YouTube.

When I eventually started paying close attention, I noticed a small inset screen in the top left of the big screen. It was the guy livestreaming the debates. He was crouched behind an open laptop, chain smoking and glaring. On the wall behind him were framed certificates I couldn’t quite make out, a flag of unknown origin and a large gun.

Suddenly, the man made the debate go small screen and he became large screen and began cursing a blue streak at the debaters.

“What’s going on in there?” the husband asked me from the next room.

“I think he is. You should see his wall!”

Quickly, I tried to close down the livestream. I closed out the screen, but I could still hear the man ranting. I went from screen to screen, reopened and reclosed screens, but he was still yelling. (The man on YouTube, not the husband.)

“Shut that down,” the husband said.

Frantically, I clicked on screens. Closed them, opened them, closed them again.

“Override him with those old movies you’ve been watching. Do something.”

More clicking, more ranting. Eventually I disconnected from the site, but probably not before cyber intelligence took note of our ISP and labeled us as followers of the anarchist.

We’re going to put off the three-day weekend. We may need the cable savings for legal fees instead.