The man who passed the baby to my arms, quietly said, “Dwarfism.” I’d noticed something different about the baby before, but didn’t put it together.

I saw it n 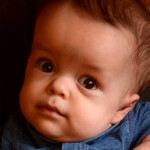 We locked eyes and his eyes searched mine. His gaze was deep, as though he was trying to convey a thousand thoughts, none of which I could decipher.

Well, one thought was clear. He didn’t care for the man who handed him to me. It was probably his loud voice. Or his deep laugh. Or his beard. In any case, the little guy preferred female company.

His parents are here somewhere among the families milling about, kids running, half-empty bowls of soup and paper plates. His dad had led worship in the church service earlier that Sunday morning. If you met the baby’s dad on the street, you might think he would be a good person to help you move furniture. Mom is average size. So are their other three children.

This one came in different packaging.

We spend a lot of time, money and energy idolizing, enshrining and striving for one certain style of physique and one narrow definition of beauty. In reality, every single one of us arrived, and will eventually grow, into infinite varieties of shapes and sizes, some fashioned a little more uniquely than others.

The baby’s parents are glad they live where they do, which is to say in an inner-city neighborhood littered with boarded-up windows, human brokenness and occasional gunfire. They are engaged in ministry to the poor. You might think they are somewhat crazy, but we cherish our somewhat crazy friends. They save us from succumbing to lives of bland white bread and homogenized everything.

There are many other children with disabilities in this neighborhood. So maybe this little one’s differences will be accepted more readily. Maybe his differences won’t be ridiculed quite as often.

One thing is sure—he’ll be surrounded by love here—love from a hundred different directions and sources.

His head is heavy and my arm is going to sleep now. I’d readjust my holding position, but it would mean risking the lock we have on one another’s eyes.

He’s not a baby you can sling on your hip. Even putting him up on your shoulder would be a tricky move. I wonder how she does it. Probably like any mother would, she has adapted to his weight distribution, his needs, his likes and dislikes and has a good idea as to what is going on behind those big brown eyes.

Surely, it will be hard for him to walk, I say to someone near. A voice answers that he has already pulled himself upright holding onto something.

Maybe he didn’t know it was supposed to be hard.

Lori Borgman is a columnist, author and speaker. Contact her at lori@loriborgman.com