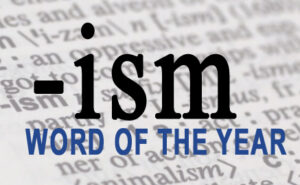 Once again, I got it wrong on the Word of the Year. Merriam-Webster announced that the most popular word of the passing year was the suffix “-ism.” Here I was hoping for a prefix, maybe something along the lines of “dis-“ or “mis-.” I even could have been happy with “re-.”

–ism isn’t actually a word you can use in a sentence or even start a sentence with (although I just did), but the Merriam Webster Word of the Year isn’t necessarily a word. Of course not. The Word of the Year is the “word” people most frequently look up at the m-w.com website. The list is quite telling, if not mildly frightening.

The most frequently looked up words included socialism fascism, racism, feminism, communism, capitalism and terrorism. Apparently a lot of people have been sleeping their way through history and philosophy. These are the same people who stumble over those man on the street interviews when asked who is buried in Grant’s Tomb. (Hint: starts with a “G” and ends with a “t.”)

Merriam-Webster selects the Word of the Year by keeping stock market-like charts noting the highs and lows of a word’s popularity. (“Oh no! Look at this, Fred! Fascism is down by 15 today!”)

Also hot on the Merriam-Webster market for 2015 was the word “hypocrite.” Hypocrite spiked when Josh Duggar was revealed to have been involved with Ashley Madison. Other people were looking up “hypocrite” in droves, while I was Googling Ashley Madison to see if it was a children’s clothing line or perhaps a brand of towels and bedding. I was wrong again on both counts, although Ashley Madison was closely linked to bedding but not in the way I had thought.

An emoji is a variation of the old yellow happy face with an infinite variety of facial expressions. The winner is a round yellow ball laughing so hard it is crying. It is officially called “Tears of Joy.” Clever, no? Basically, Oxford Dictionaries, in an age of amazing technological, medical and scientific progress, chose the first cousin of a hieroglyphic as Word of the Year.

I like emojis. I consider them a good safety net for when we are all so mind-numbed that we return to communicating by drawing pictures on the walls of caves. It’s always good to have a backup plan. Or an extra –ism or two.