We play outdoor games at Thanksgiving. I blame the Kennedys. As a child, I remember hearing about the Kennedys 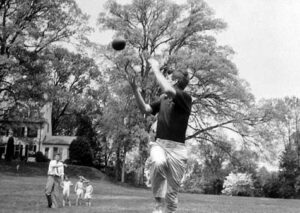 playing football at Hyannis Port every Thanksgiving. Everyone around me had eaten themselves into a carbohydrate-induced stupor and the Kennedys were outside playing ball. It sounded so fun. So wholesome. And they all had such good teeth.

We instituted a tradition of Thanksgiving games a decade ago when the youngest invited a bunch of college friends home the weekend before Thanksgiving. After feeding them, we announced Ye Olde Pilgrim Games would commence out back.

The original (and only) pilgrim game consisted of a person balancing the tip of a broom handle in the palm of one hand, staring up at the bristles and spinning in a circle 10 times. We told the kids that the game was a favorite of William Bradford. We think they believed us. Even the history majors.

After spinning wildly, the player throws the broom to the ground and tries to jump over it. This results in a lot of staggering, tripping, falling, sprawling and great Ye Olde Pilgrim Game photos. If only the Pilgrims had had cell phones.

In the ensuing 10 years, we have acquired numerous small grandchildren whom we do not want spinning to the point of nausea so our traditions are changing. Last year we implemented new Ye Olde Pilgrim Games, including a turkey chase and a deer hunt.

Yes, the deer did look a lot like the husband wearing felt reindeer antlers and a cardboard 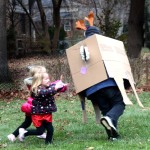 box with four cardboard legs and a tail. Each grandchild got two tags, or purple Post-Its. (It is a little known fact that the Pilgrims lived in a two-tag county.)

They tore out of the house and flushed out the deer with shrieking and screaming. Back and forth, in and out of the pines, around the maple, the deer was tagged once, twice, maybe three times. Then the deer cut a sharp turn, stumbled and dropped to the ground.

The deer jumped back up, but his cardboard hindquarters had been crushed, his chest was creased, his antlers were catawampus and the tail was history. The deer hunt was suspended due to a sensitive toddler screaming, “Don’t hurt Grandpa!”

The turkey chase went slightly better in that there was no crying.  The goal was to pluck brightly colored feathers from the turkey. This was a tall challenge since the hunt party hovered around 40 inches high and the turkey was 6-foot-2 (tall for even a free-range pilgrim turkey). There seemed to be a clear winner until the kids started swapping feathers for different colors and eventually nobody knew which feathers belonged to who or who had how many.

In any case, new traditions were born and will continue again this year providing a deer and turkey step forward. There is one tradition that never changes however, and that is the one of gathering around the table, sharing a bounty of food and giving thanks to God for his generous provision. A heart of thanksgiving was as essential to life in 1600s as it is today. The world around us changes constantly, but a few of the permanent things never do.